Band on the Wall presents a special edition of Free Vibes, curated with Amazing Radio’s new music champion Shell Zenner. We’ve teamed up with Shell to bring you four of the most exciting artists you need to know. Sign up for free entry and discover new music from the likes of TVAM, Then Thickens, Witch Fever and Koalas. DJ Shell Zenner will keep the vibes flowing ‘til late!

TVAM
TVAM is one man, Joe Oxley. Taking influence from a lifetime of repeats, reruns and reboots, he crafted his own low-budget, high-risk concept. A world in which broadcast becomes performance. Sonic references straddle the spectrum of influence – think Boards of Canada’s irresistible nostalgia, think Suicide’s deconstructed rock’n’roll, think My Bloody Valentine’s infinite noise.

Then Thickens
Then Thickens is the brainchild of Jon-Lee Martin. A four-piece from Chorley, Then Thickens combine stomping four-to-the-floor drums, layered, spritely guitars and anguished vocals to create a compelling sound, that transcends the norm of indie landfill! 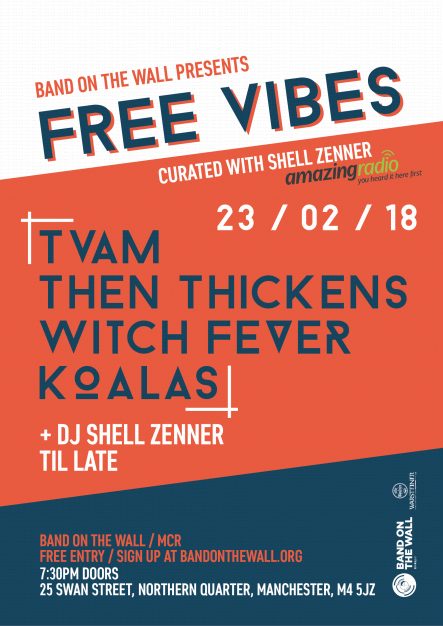