Band on the Wall presents a special edition of Free Vibes, curated with Amazing Radio’s new music champion Shell Zenner. We’ve teamed up with Shell to bring you four of the most exciting artists you need to know. Sign up for free entry and discover new music from the likes of Bethlehem Casuals, Tonica, Plato and Drew Selby. DJ Shell Zenner will keep the vibes flowing ‘til late!

Tonica
Tonica are a Manchester-based electro-pop duo, fuelled by a desire to offer indie-pop music with substance!

Drew Selby
Manchester based artist Drew Selby creates guitar music influenced by the best of Greater Manchester’s past such as the Stone Roses, Oasis and the Verve. His debut EP Runaway is available now on all streaming platforms. 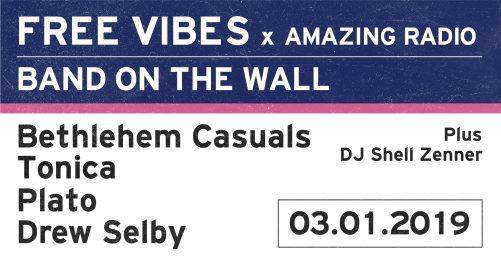