Band on the Wall presents Free Vibes – a free-entry event showcasing some of the most exciting artists you need to know. Sign up for free entry and discover new music from the likes of Move, Grimm Twins, Chevron Shawl & Demur.

MOVE
Move are a shape-shifting alternative rock band who have gone by a number of different names in the past. There edgy rock is brilliantly backed by hard hitting drums. One for fans of early 90s music.

GRIMM TWINS
Hailing from Macclesfield, Grimm Twins are a collective that deliver what they dub as ‘end of the world armageddon disco’.

CHEVRON SHAWL
West-coast pop is Chevron Shawl’s game and this five-piece is led by singer-songwriter Katie O’Malley with The Watchmakers’ Adam Lewis on guitar, Emylie O’Malley on vocals, James Gaskill on drums and Jack Flett on bass. 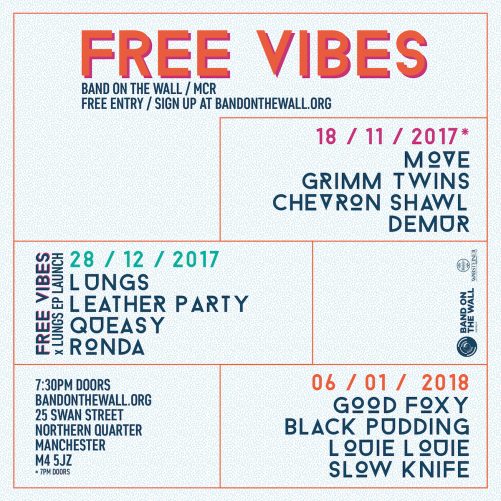