Join us for this free entry, relaxed folk session at the Mechanics Institute. The session is open to everyone, whether you’re a musician wanting to take part in a singalong or a lover of folk music who just wants to watch or sing along. All are welcome – bring your instrument if you fancy!

Bob Ashworth and Martin Gittins were active individually on the local folk music scene for many years, but then they came together to form the duo ‘Bunting and Frolics’, cleverly doubling their repertoire to a stunning seven (7) songs! As Bunting and Frolics they have been getting away with their so-called ‘act’ for over two decades, thus proving that you CAN fool all of the people all of the time.

For many years Martin ran a successful folk club at The Star Inn, Salford, and, at the same time, Bob ran a failing second hand stall on Conran Street Market.
​
Lately, they have been involved in various projects commemorating the Peterloo Massacre, including a performance piece entitled ‘Peterloo – Soldiers on the Rampage’ in which they are joined by the writer of the work local folk leg-end Geoff Higginbottom to form ‘The Free Radicals’. The trio also appear as ‘Flat Back Four’ when they perform Geoff’s other musical documentary ‘The Flowers Of Manchester’ telling the story of Manchester United and the Munich air crash. 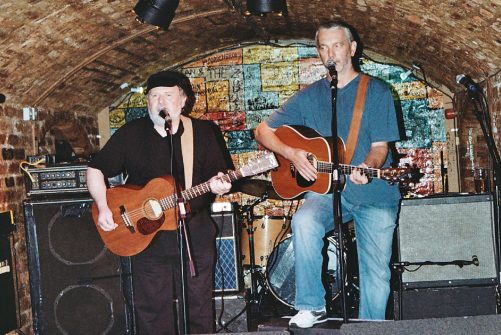