Performing in front of an estimated 2 billion people at the 2010 World Cup Opening Ceremony and astonishing audiences at Glastonbury with Damon Albarn’s Africa Express, we are delighted to present Femi Kuti – one of Africa’s biggest stars live at Band on the Wall, Manchester.

Emerging from the giant shadow that his father Fela Kuti cast, Femi is the true heir to the Afrobeat crown, his music reaching across the globe with a powerful and distinctive voice. Like his contemporaries, Amadou & Mariam and Baaba Maal, this is a jubilant, funky music and dance mix. Advance booking strongly recommended.

“Afro-pop to get your butt shaking and your blood boiling. Lets party” Pop Matters

“High energy dance party with a message of peace…” Variety

A Band on the Wall Fundariser Event. Presented by Band on the Wall in association with We Face Forward – a season of contemporary art and music from West Africa, celebrated across Manchester as part of the London 2012 Festival. www.wefaceforward.org 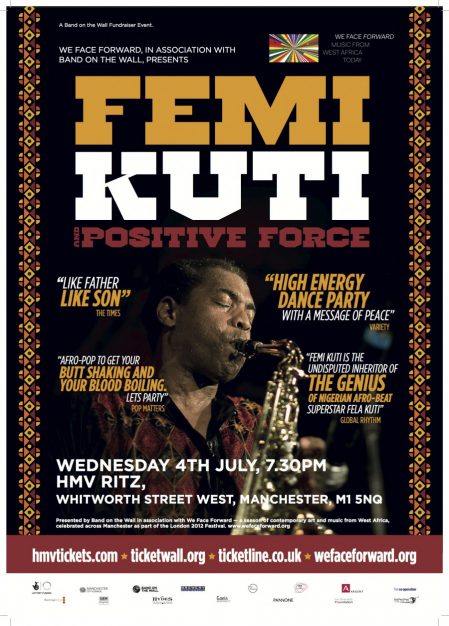