Errant Monks
Psychopposition – Advanced Guard. Defying cuts on the frontline. Community care provided through communication of the light to the lost, the lied to and the left behind. Heady body music from the Manchester/Calderdale collective.

Sarah Yaseen
Sarah Yaseen aka Sarah The Sufi is a Manchester based Sufi singer/songwriter. With a soulful voice and accompanied by a guitar or darabouka, Sarah’s raw Acappella/cantata style takes the audience into her world of emotions and feelings of love, faith, personal struggle, including sharing her political stance through influential, unique compositions. She comes from an Islamic tradition of religious singers. Inspired by her father Sufi Muhammad Yaseen, Sarah’s voice, words and melodies reach out and touch the human soul.

Locean
Looking for more restrictions than the page or traditional readings for her poems, Locean was formed by Lauren Bolger in 2013 as one way of carving her own restrictions to place over her award-winning poetry. 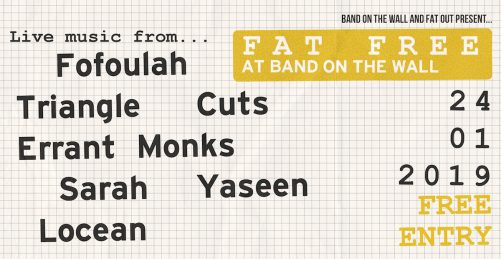