Band on the Wall is proud to present Dub Colossus, winner of the 2013 Songlines Cross Cultural Collaboration Award.

Dub Colossus bring Dubwise sounds with a broad musical outlook, from Ethio – Jazz to full on funky grooves with a little Afrobeat thrown in for good measure, lovingly put together on a solid foundation of Dub.

Promoting their highly acclaimed 4th album ‘Addis To Omega’, Dub Colossus are appearing with their 5 piece ‘Soundsystem’ line up featuring the vocal talents of PJ Higgins and Mykaell S Riley.

Dub Colossus is the vision of Dubulah – aka Nick Page, composer, guitarist, bass player, producer and programmer. Nick has worked with a long list of notable artists and eccentrics. In 1990 he formed Trans-Global Underground with Tim Whelan and Hammid Man-Tu, with whom he produced, wrote and played on six albums before leaving in 1997 to form Temple of Sound. Once Temple of Sound had run its course, Nick then decided to concentrate on his favourite alter ego, Dub Colossus. Having signed the project to Real World Records, Nick produced 3 albums for the label, beginning with ‘A Town Called Addis’, which was released in 2008, ‘Addis Through The Looking Glass’ in 2011, and ‘Dub Me Tender Vols 1&2’ in 2012. Now with a new home at IRL, 2014 saw the release of ‘Addis To Omega’.

‘Addis To Omega’ takes the project further into explorations of the UK/Jamaican musical heritage, with a little sidestep into other avenues along the way. With guest performances from a wide variety of musicians, and recording sessions taking place in London, Barcelona, Paris and Tuva, this album delves into many a musical genre, but wraps it all into one dubby package. Bass Culture meets Dubadelica!

This is global dub for the 21st century and one not to miss! 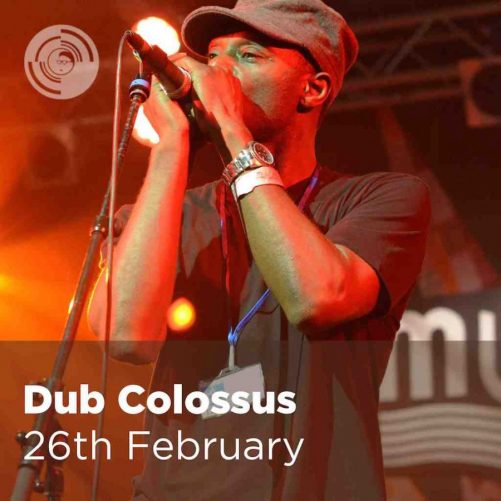