Band on the Wall continues it’s series of We Face Forward concerts, featuring the cream of West African artists, with this very special live Senegalese double bill. Featuring Diabel Cissokho, who mixes traditional rhythms with upbeat African dance, plus Carlou D and his 7 piece band – the outspoken voice from Senegal’s hip hop generation. DJ for night is Hot Pepper spinning out the best African tunes before and after the live sets.

Diabel Cissokho
Part of the great line of Cissokho griots, Senegalese kora maestro Diabel Cissokho’s virtuosity and versatility on the harp-like kora is astounding. Collaborating with everyone from Kandia Kouyate and Pee Wee Ellis to bluesman Ramon Goose – and even a long stint as Baaba Maal’s kora player – Diabel’s ‘resonant voice and rocking kora style’ (Songlines) have been welcomed everywhere from WOMAD and Glastonbury to London’s Barbican. With his own four-piece band, Diabel draws on his rich musical heritage, blending bluesy West African melodies with an upbeat groove, guaranteeing to bring audiences to their feet! Expect this to be one of the musical highlights of We Face Forward’s programme of internationally-acclaimed artists from West Africa.

Carlou D
An outspoken voice from Senegal’s hip-hop generation, Carlou D and his 7-piece band bring spiritual roots music, clean living and electric performances straight from Dakar’s ripe music scene. Carlou (like World Circuit stablemate Cheikh Lo) belongs to one of Senegal’s spiritual sects, the Baay Fall, and takes much of his musical inspiration from his spiritual guide, Cheikh Ibra Fall. Taking the essence of the Baay Fall philosophy, the outspoken qualities of hip-hop, and musical elements of jazz, soul, rap, and acoustic roots, Carlou D is an illuminating presence on stage – definitely make him one of Senegal’s next great musical exports.

This concert will begin at 8.30pm but our Picturehouse Cafe Bar is open from 5.30pm for delicious food and drinks. 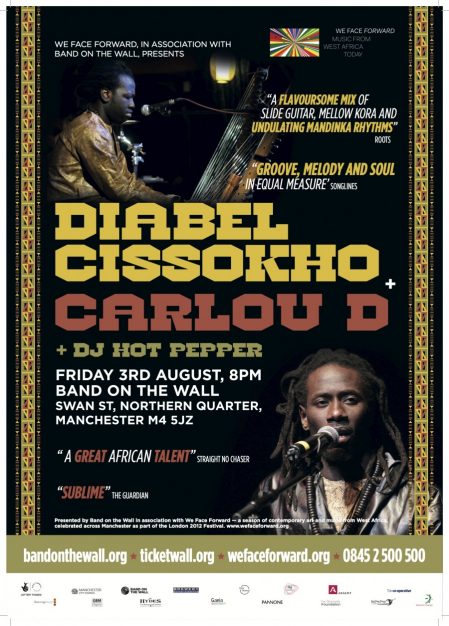