Dezi ‘Fiddle on Fire’ Donnelly is a Manchester-based fiddle player and one of the founder members of the revered celtic rock band ‘Toss the Feathers’.

Having played the fiddle since the age of 7, Dezi was North West and All Britain fiddle champion by the age of 9. Amazingly, by the age of 15, he had won the All Ireland championship an astounding 5 times! He also won the ‘Fiddler of London’ twice; a competition held in the memory of Dezi’s uncle Des Donnelly who was tragically killed in a building site accident in June 1973, four days before Dezi was born. Dezi joined Toss The Feathers whilst still in his teens and between 1988-91 and 1994-95 he appeared on the brilliant ‘Columbus Eclipse’ and ‘Awakenings’ albums.

It was during this period that Dezi recorded some tracks with Mancunian flutist Michael McGoldrick. Mike’s flute and Dezi’s fiddle gently spar on most of the tracks, however each take the lead when required and the arrangements allow them to swap leads within sets to great effect. The tracks were later released on the album ‘Champions Of The North’, and Dezi also featured on Mike’s amazing ‘Fused’ album. He also played on McGoldricks ‘Wired’ and ‘Aurora’.

Mike McGoldrick has been a member of several influential bands. In 1994 he was awarded the BBC Young Tradition Award, and in 2001 he was given the Instrumentalist of the Year award at the BBC Radio 2 Folk Awards. He was a founder-member of Toss the Feathers while still at school, and formed the band Fluke! (later renamed as Flook) with Brian Finnegan and Sarah Allen in November 1995. After one tour, he left to pursue other projects. He was an early member of Lúnasa from 1997 until roughly 2000 and played on their first albums. He also joined Capercaillie in 1997, playing on four albums.

McGoldrick has played regularly for Afro-Celt Sound System and Kate Rusby’s band. In 2010 Michael replaced John McCusker, joining Tim O’Brien on Mark Knopfler’s US leg of the Get Lucky Tour. This being a success, he was invited (and accepted) to stay on for the remainder of the world tour in Europe when John McCusker had returned. He went on to play on the next Mark Knopfler album, ‘Privateering’ and played with the band for the subsequent world tour. 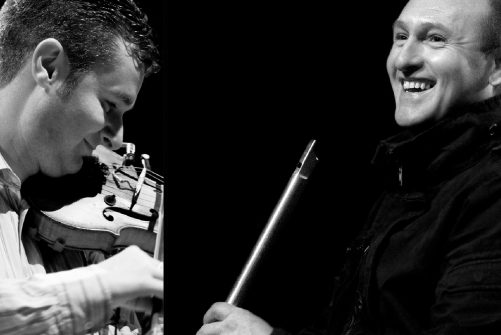