Dezi Donnelly + Eddie Sheehan and special guest Anita Ryan – A commemoration of the 200th Anniversary of the Peterloo Massacre at the The Mechanics Institute, Manchester

Dezi ‘Fiddle on Fire’ Donnelly is a Manchester-based fiddle player and one of the founder members of the revered celtic rock band ‘Toss the Feathers’.

Having played the fiddle since the age of 7, Dezi was North West and All Britain fiddle champion by the age of 9. Amazingly, by the age of 15, he had won the All Ireland championship an astounding 5 times! He also won the ‘Fiddler of London’ twice; a competition held in the memory of Dezi’s uncle Des Donnelly who was tragically killed in a building site accident in June 1973, four days before Dezi was born. Dezi joined Toss The Feathers whilst still in his teens and between 1988-91 and 1994-95 he appeared on the brilliant ‘Columbus Eclipse’ and ‘Awakenings’ albums.

It was during this period that Dezi recorded some tracks with Mancunian flutist Michael McGoldrick. Mike’s flute and Dezi’s fiddle gently spar on most of the tracks, however each take the lead when required and the arrangements allow them to swap leads within sets to great effect. The tracks were later released on the album ‘Champions Of The North’, and Dezi also featured on Mike’s amazing ‘Fused’ album. He also played on McGoldricks ‘Wired’ and ‘Aurora’.

Eddie Sheehan is a Singer/ Guitarist from Fethard in County Tipperary, now living in Edinburgh, Scotland. He writes his own songs and delivers great versions of songs from a treasure trove of Irish writers. It was while growing up in the valley of the Slievenamon Mountain in South Tipperary that Eddie quickly gained a reputation for being a “natural” in the art of Ballad singing, following in his Father’s footsteps. “The Clancy Brothers and Tommy Makem”, Luke Kelly and “The Fureys and Davey Arthur” were the prominent influences of the day and many songs were learned purely by osmosis. 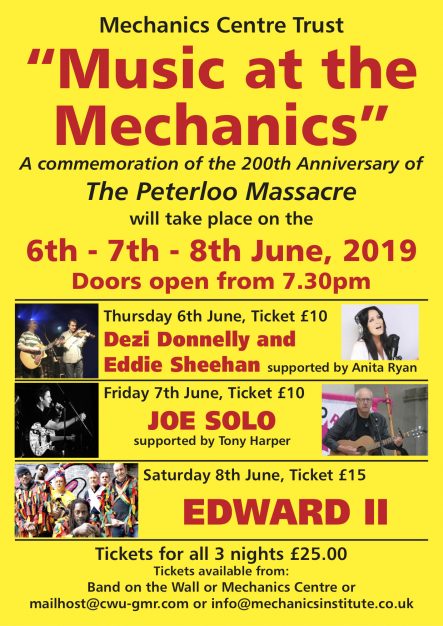