De Staat are a rock band opening the floodgates to an intoxicating, even dizzying, array of genres, which is not particularly unusual for them. It’s been woven into their DNA since day one.

The massive lead single ‘KITTY KITTY’ couldn’t serve as a better primer for the upcoming album. Not only does the labyrinthian six-minutes and 45-seconds boast a gigantic, bubbling bassline, it also boldly attempts to capture the conflicting arguments transpiring on the global political stage right now. “That song is very much based on when Trump arrived,” explains Torre. “It’s a collection of words and sentences which came into my head during that campaign – it’s about the creation of different groups in society and how they’re completely in their own bubble.”

Through their own brand of rock more and more people are noticing them over the years, which led De Staat to landing some highly coveted support slots including The Rolling Stones in Amsterdam and a run with Muse across Europe with their blockbusting 2016 Drones tour. After this tour impending stardom is not going to their heads and Torre was preoccupied with the idea of De Staat’s new fifth album.

De Staat have many new, bold and diverse songs at their disposal. As for the old lingering criticism that De Staat don’t fit into a box? Torre has a theory on that…
“If we did I think we’d be a boring-ass band,” he smiles. “We’re now at a point where we’re very relaxed because we really know who we are. There’s always something in our music that’s interesting, and if there’s a song you really hate? That’s your bubble, man. To me, that’s a lot more inspiring than something you just find to be OK!”

First envisioned by Torre in 2006 as something of a challenge to himself – before there was a group, there was a one-man project in Nijmegen, Holland. “I was making so much music, all different kinds,” grins Torre. “I just wanted to see if I could make something that sounded like one thing!” Having wrangled said sounds together, that ‘one thing’ would soon become known as De Staat – translated as ‘The State’ – and their 2009 debut, Wait For Evolution. With a line-up completed by lead guitarist Vedran Mircetic, bassist Jop van Summeren, multi-instrumentalist Rocco Hueting and drummer Tim van Delft, De Staat have achieved remarkable things since those fledgling days. Across three more colourful albums, 2011’s Machinery, 2013’s I_Con and 2016’s O, De Staat have established a chameleonic brand of rock that is wholly their own – a band who cite the influence of everyone from Talking Heads, Rihanna, and Nine Inch Nails to Radiohead, Michael Jackson, Run-DMC and Soulwax. 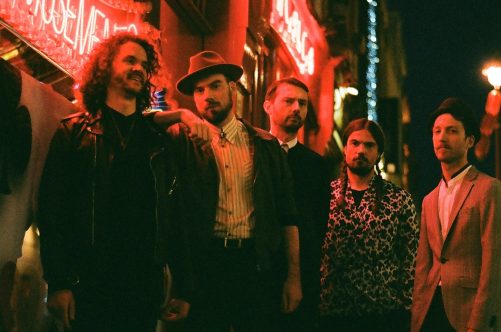