Culture Clash clubnight returns to test out the famous Band on the Wall rig! Join us for a celebration of sound system culture with the big sound of Sir Coxsone Outernational, Notting Hill Carnival resident Aba Shanti-I and Manchester reggae heroes Nucleus Roots.

“I don’t think you can have a conversation about sound-systems in the UK without mentioning us,” says Lloyd Coxsone. “We’ve been there and done it, and we’ve inspired a generation of sound-systems worldwide.”

Sir Coxsone recently celebrated its 50th anniversary. That’s a lifetime, and founder member Lloydie Coxsone has spent his promoting reggae music to the heights. The veteran soundman has won every accolade the reggae world can offer, and no other sound-system in England can claim such mythical status.

Aba used to deejay on ‘Jah Tubby’s’ sound system and at that time he was known as ‘Jasmine Joe’. Those of you that were around the sound system scene in the eighties will remember the slightly extrovert mic man that ‘Jah Tubby’s’ had; that was Aba.

When Joe embraced the Rastafarian faith he adopted a new and more positive attitude and with his rediscovered faith a new name.
That name was and is ‘Aba Shanti-I’,pronounced ABA SHANTI-EYE not ONE. So you see the name ‘Aba Shanti-I’ is not just the name of the sound system, it is the name of the person that is playing the sound. 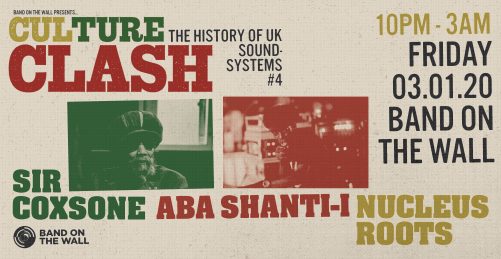