We’re taking the flavoursome funk far into the night as the Craig Charles Funk & Soul Club returns to Band on the Wall with acclaimed DJ, actor, presenter and funkster about town Craig Charles manning the decks, plus special guests K.O.G & The Zongo Brigade live!

K.O.G & The Zongo Brigade are a 9-piece that deliver infectious West African vibes from Ghana via Sheffield, with diverse origins conflating to whip up their signature heady brew of afrobeat, soul, funk and reggae otherwise dubbed “Afro-fusion”.

With the leadership of K.O.G, the Ghanaian born force of nature, they are a whirlwind of energy, rhythm and hard hitting musical unity which has been taking the U.K. by storm. Summer 2015 has seen them play the breadth of the UK festival circuit including Glastonbury via their emerging talent competition, via which they were chosen from over 6000 bands to play the massive West Holts stage.

Having released their debut, the “Akwaaba” Live EP, and a album in the works, they are garnering increasing attention and quickly growing their fan base – things are looking very good for this exhilarating and exceptional talented band. 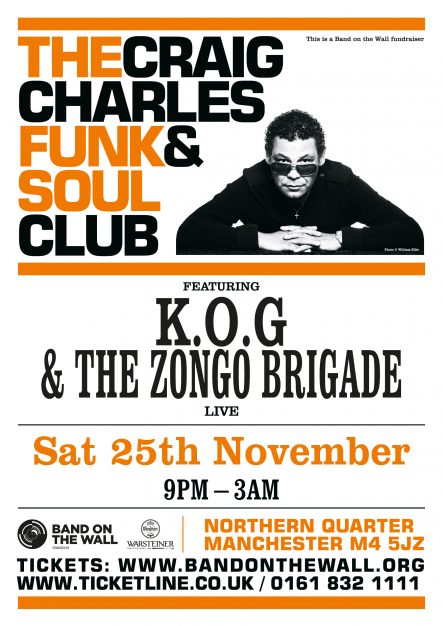