* Due to the tremendous popularity of this night there will only be 100 tickets reserved for sale on the door. Get there early to avoid the queue!

This month Craig Charles is delighted to showcase a full live set by The Bongolian, AKA multi-instrumentalist and Big Boss Man front man Nasser Bouzida and his incredible band.

A decade ago Nasser Bouzida disappeared into his studio and created a solo set of recordings which resulted in the birth of his alter ego The Bongolian. Drawing on his influences of Funk, Soul and Jazz Nasser produced an inspired selection of recordings blending elements of grinding percussion and heavy Bongo rhythms.

The eponymous debut ‘The Bongolian’ was released early in 2002 to much critical acclaim, and followed up by the 2006 ‘Blueprint’ and in 2008 by ‘Outer Bongolia’ (which scored a licensing deal in Japan).His most recent release, Bongos For Beatniks, upped the pressure on the funk cooker even more. The albums have become record box essentials for DJs, finding a wide appeal from Dance and Hip-Hop to rare groove and funk 45s fans. Nasser has assembled a high calibre five piece live band with whom The Bongolian have toured USA, UK and Europe. Band on the Wall is delighted to welcome this modern funk hero to Manchester for what promises to be a banger of a night.

“Nasser Bouzida is a man with talent to spare. A Latin-flavoured jazz-funk odyssey” `
Q Magazine

“The UK’s premier exponent of bongo-driven freakbeat” Plan B

“Forget your preconceptions, this is the REAL incredible bongo band” Clash

This event will begin at 9pm but our Picturehouse Cafe Bar is open earlier for drinks and good times. 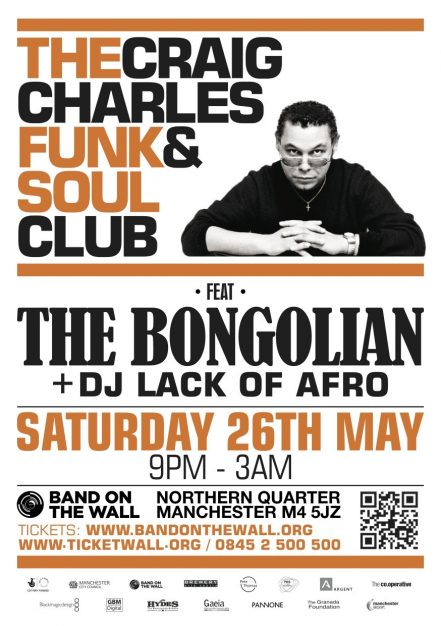