There will be a limited amount of tickets available on the door priced 17.50

Advance tickets sold out – There will be 80 tickets on the door from 9pm.

The Funk ‘n’ Soul Show goes live featuring a full live set by Afro-Latin funk sensations Jungle Fire plus Craig Charles manning the decks until 3am. This is by far Manchester’s most popular good-feel funk night so get your tickets early and jump the queue! Early Bird tickets available too but be quick!!!

The JUNGLE FIRE sound digs deep into afro/latin funk with an approach that is both authentic and highly explosive! Comprised of musicians from the Los Angeles region, JUNGLE FIRE pulls from only those who are dedicated to preserving, protecting and progressing LA’s funk and latin scenes.

This past summer (2012) we saw the release of JUNGLE FIRE’s debut vinyl 45 released on indie label Colemine Records. Since then the single has been lauded by the likes of DJ Gilles Peterson Worldwide BBC 1 radio, Dj Rich Medina, Dj Bobbito Garcia, Dj Spinna, Jeremy Sole KCRW, DJ, Mark NuMark, DJ Cut Chemist, and many others worldwide. 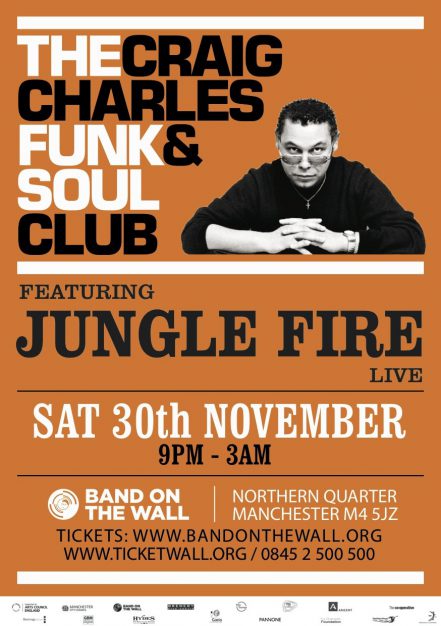