The Craig Charles Funk and Soul Club returns to Leeds with the incredible Funkshone live plus presenter, DJ, actor and funkster Craig Charles manning the decks ’till the early hours with the planet’s funkiest tunes.

Funkshone are an original funk act from the UK created by musician, DJ and producer Mike Bandoni, Producer Nino Auricchio plus special guests.

Formed in 2006 Funkshone have recorded and released a series of vinyl 45’s on UK funk label ‘Skyline Recordings’. The first title ‘Purification parts 1 & 2’ has now become a deep funk classic amongst the global funk contingent with the others following on right behind it! Due to the popularity of the Funkshone sound, Mike formed the band in early 2007.

This 9-piece band now offers a storming live show comprising of original deep funk gems alongside better-known and some not so well known obscure funk covers. Expect wild funk drum breaks and a razor sharp rhythm section, driven bass lines, killer horn lines and a whole lot of soul in our vocals from the soul funk powerhouse that is Miss Jaelee Small! 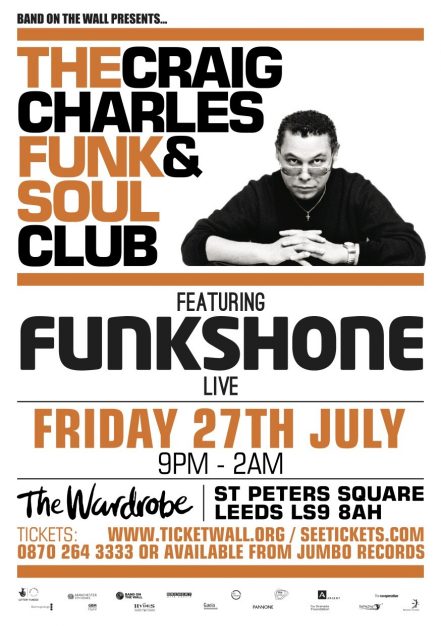