Craig Charles’ Funk n Soul Club returns for another month at Band on the Wall, with Craig playing a fine assortment of funk, soul and feel good party grooves to keep you dancing until the early hours. This month’s live band is The Getup.

As great exponents of ‘Hammond funk’, The Getup have been pumping out authentic grooves, topped with infectious melodies and horn-laden funk since 2004. Ten years on, the band have appeared in session on BBC 6 Music’s Craig Charles Funk & Soul Show, and released a number of irresistible tracks. 2013 saw a string of successful 7″ vinyl releases with innovative London funk and hip hop label Breakin’ Bread. The new album takes that success and runs with it, with fans such as Craig Charles and legendary DJ and Latin percussion superstar Snowboy really singing the band’s praises, and spinning the vinyl to dust.

The core quartet of Hammond player Mark Ashfield, drummer Mark Claydon, bassist Ian Stevens and guitarist Lee Blackmore are joined on the album by the soulful powerhouse vocals of Sabina Challenger, and the regular Getup horns that are Tristan Gaudion on trumpet and saxophonist Stephen Wilcock are augmented further by the incredible Mark Norton on baritone sax, Alex Harris on tenor sax, and Ben Greenslade-Stanton on trombone.

The Getup’s unique sound can be attributed to not only their influences – Booker T, Charles Earland, Brian Auger, Eddie Russ – but also many of those rare funk 45’s from the 50s and 60s! 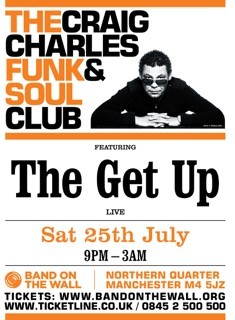