100 TICKETS NOW AVAILABLE FROM 9PM ON THE DOOR ONLY. GET DOWN EARLY FOR MANCHESTER’S FAVOURITE, FUNKIEST AND FIENDLIEST CLUB NIGHT!

The Funk ‘n’ Soul Show goes live for what is now considered one of Manchester’s biggest and friendliest club nights featuring a full live set by the scorching Hammond, no nonsense, dancefloor-filling The Getup followed by DJ, actor and funkster about town Craig Charles manning the decks until 3am.

True heavyweights in the Hammond Funk category, The Getup are fast establishing a reputation for irresistible grooves, infectious melodies and energetic performances that have been shaking dance floors since 2004.

With fans including not only Craig Charles but a wealth of club and festival goers across the UK and Europe, The Getup sold out of their debut release, Getup & Groove (2007), within months. Having released the follow-up album Life @ Cafe Eric (2008) to critical acclaim with live dates in major venues including the Jazz Cafe (Camden), the legendary 100 Club (Oxford Street) and St Paul Soul Jazz Festival (France), the group’s latest studio excursions will be released as a series of singles on innovative London Hip Hop and Funk label Breakin Bread. 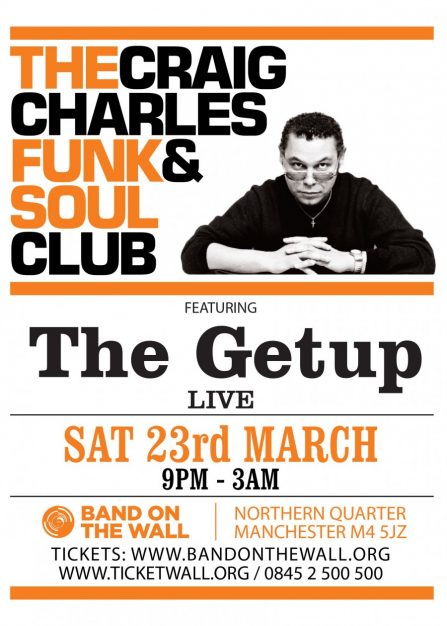