Get down to Britain’s biggest and funkiest Christmas Party! The Funk & Soul Club heads to Blackpool for a Christmas Ball.

BBC R6 DJ and much loved star of Red Dwarf and Coronation Street Craig Charles will be manning the decks in The Empress Ballroom for a funky dance-floor christmas party like no other!

And that’s not all; this very special show will feature a full live show from UK soul pioneers Soul II Soul ft. Jazzie B and Caron Wheeler.

2014 is Soul II Soul’s 25th Anniversary year and they will perform this full band, old school-style gig to celebrate.

From their inception, the Soul II Soul sound was original, new, fresh, and infectious. They had a slogan “A happy face, a thumpin’ bass, for a lovin’ race” and with hit singles – notably with Keep On Movin’ and ‘Back To Life’ – Soul II Soul enjoyed the type of chart success that made them household names all over the world.

To date Soul II Soul have sold over 10 million albums in over 35 territories worldwide. They’ve performed in over 20 countries, and appeared at some of the most famous venues in the world including Wembley and New York’s Universal Ample Theatre. This December, they add The Empress Ballroom to the list.

This is an Inner City Music Fundraiser 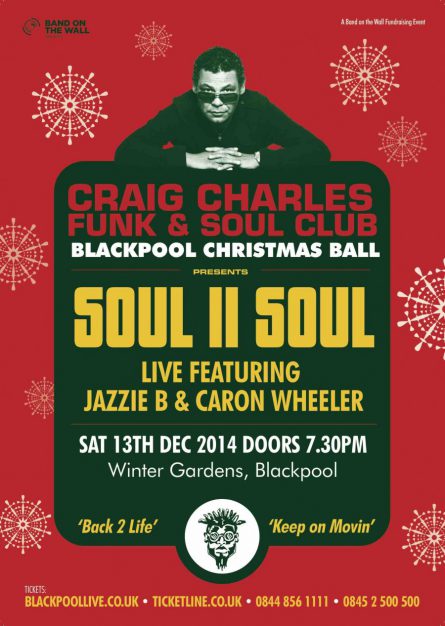