Band on the Wall Film Club – The Upsetter: The Life & Music of Lee ‘Scratch’ Perry

The second installment of the Band on the Wall Film Club is acclaimed documentary The Upsetter: The Life & Music of Lee ‘Scratch’ Perry.

Narrated by Academy Award-winning actor Benicio Del Toro, The Upsetter is a captivating, unparalleled exploration charting 70 years in the life of the Godfather of Reggae and the man behind Bob Marley – Lee ‘Scratch’ Perry.  It is equally a documentation of 30 years of Jamaican music and culture as it is a study of one of the most creative and inspiring human beings of all time. The film features interviews with Paul McCartney, The Beastie Boys, Peter Tosh and members of The Clash, displaying the profile of this truly legendary music maker.

The Picturehouse bar will be open at 5pm, where a selection of Lee ‘Scratch’ Perry t-shirts and posters will be available to purchase, courtesy of New Analog. Spice Master Giles will be preparing a Carribean feast of Curry Goat, Jerk Chicken and Callaloo, which is free with your ticket, and is available to enjoy before or during the film screening, which begins at 7.30pm in the venue space.

Finally, upon purchasing a ticket for the screening you become eligable for exclusive discount: £20 tickets for Lee ‘Scratch’ Perry’s live dates here on 30th and 31st March. This offer is subject to availability, and for a limited time only, so make sure you take this opportunity to see a film about the great producer, and then the man himself in concert.

This project is supported by Film Hub North West Central, proud to be part of the BFI Film Audience Network 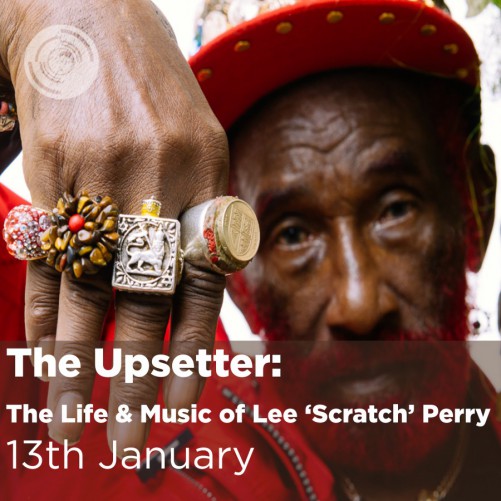