Born in South London in 1964, Toby Marks was drawn to music from an early age and formed his first band as a drummer, at the age of 14. He went on to sing and play guitar in a variety of styles, exploring rock, folk, jazz and world music, before discovering electronic dance music via the late ‘80s Acid House scene.

In 1989 he formed Banco de Gaia, focussing on world music-infused dance and ambient/chill-out styles, much like KLF, The Orb and the em:t label were also doing at the time, during a very exciting movement.The have been seventeen Banco de Gaia albums to date, as well as a few early mix tapes that make that figure up to 20. His official debut album ‘Maya‘ received a Mercury Music Prize nomination, and he achieved notoriety for his pro-Tibetan follow up ‘Last Train to Lhasa’. Banco de Gaia supported artists as diverse  as Ozric Tentacles and Transglobal Underground, cultivating a following that has stayed with them since the early days.

Last Train to Lhasa celebrates it’s 20th anniversary this year, and to celebrate, Banco de Gaia are doing a full show with the three piece band and stunning visuals and projections. Their show at Band on the Wall will be crucial for all world music infused electronic fans. 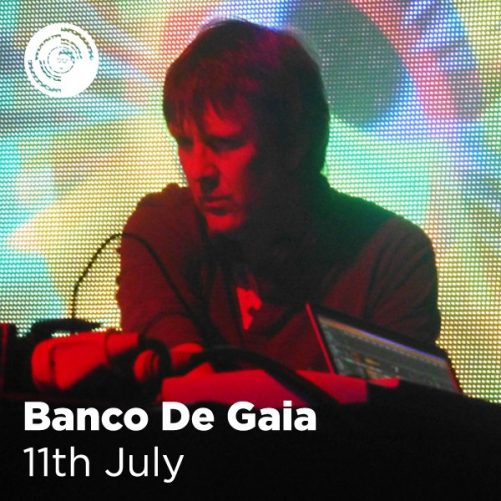