AfroCubism live at The Bridgewater Hall

The internationally-acclaimed new project from the makers of Buena Vista Social Club. The best of Cuban and Malian musicians combine to form a supergroup for a thrilling, unmissable night at Manchester’s Bridgewater Hall.

‘A cross-cultural tour-de-force’ The Times

The original idea for the Buena Vista Social Club was to bring Havana and Mali’s musicians together to record in Havana; the Malians couldn’t make it and so the Buena Vista Social Club became entirely Cuban. Sixteen years later, they tried again; the result is AfroCubism, 13 musicians who put out a riotous mix of traditional African sounds and Cuban beats. The group come to Manchester this summer as part of We Face Forward, a festival of West African art and music that brings the very best of this vibrant region to the UK. AfroCubism play a rare UK gig at the Bridgewater Hall during the festival’s launch weekend. The group includes Grammy award-winner, Toumani Diobaté and Buena Vista original Eliades Ochoa and is, frankly, unmissable.

A Band on the Wall Fundariser Event. Presented by Band on the Wall in association with We Face Forward – a season of contemporary art and music from West Africa, celebrated across Manchester as part of the London 2012 Festival. www.wefaceforward.org 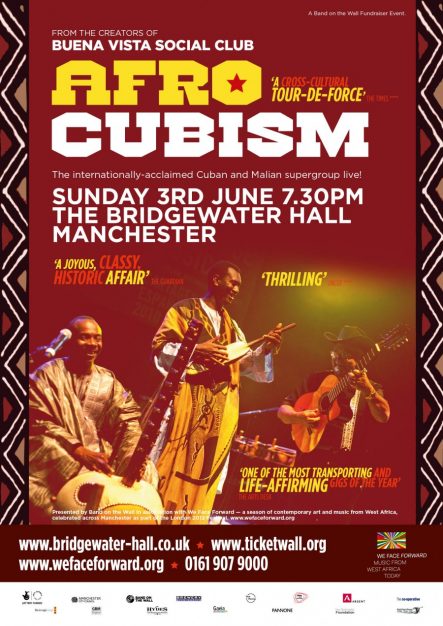