The sprawling universe of that is Acid Mothers Temple was formed in 1995 by Kawabata Makoto. Originally titled the Acid Mothers Temple soul-collective and encompassing musicians, dancers, artists, farmers, channellers, ex-yakuza, mermaid researchers and professional vagrants, the collective has always had at its core a dedication to improvised music. Now with a history of over two decades, and a discography of over one hundred releases, which is not to mention the numerous solo and side-project releases which encompass everything from drone, acid-folk, acapella, to minimalist composition, the group show no signs of relenting in the pace of their creative energy.

In December 2017 Acid Mothers Temple & The Melting Paraiso UFO welcomed new vocalist Jyonson Tsu, and performed an initial show together in Tokyo at the Annual Acid Mothers Temple Festival. Sadly this era also marked the departure from the band of long-standing member Mitsuru Tabata. This new incarnation of the AMT collective, featuring founders Kawabata and Higashi, at the helm, plus the recently recruited rhythm section of Sakamoto and Uchida who joined the group in 2015. The band toured Europe in this new incarnation for the first time in Autumn 2018, and we can’t wait to bring this most unique and heavy-hitting creative forces back to Band on the Wall.

This is a standing show. Presented by Band on the Wall in association with Manchester Psych Fest. 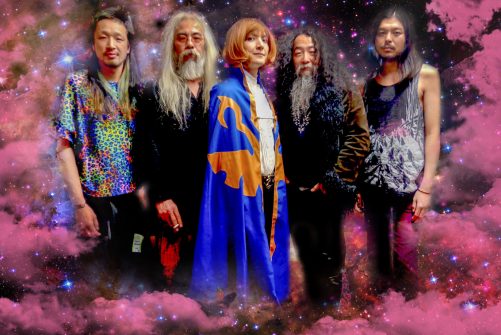