Prose are an organic-acoustic-hip-hop three-piece who are coming for your soul. From the mean(ish) streets of Stretford, via a yellow brick road of sweat, struggle, melody and pummelling beats. They’ve got very big hearts, but you probably wouldn’t like them when they’re angry.

The band defy genre because in the fiercest way, they are a genre of their own. They take the best of what has come before in the city; the emotional eloquence of Oasis; the street poetry of John Cooper Clarke; the psychedelic ambition of The Stone Roses and the spirit of when New Order looted the NYC gay clubs of the early 80s and invented dance music as we know it. For good measure, they’ll also namecheck Tupac, Hendrix, Red Hot Chili Peppers, Alanis Morrissette, Nirvana and Queen.

At the centre of all this is Mike Murray, a putting new bite into the ‘white rapper’ genre with a whose machine-gunning rhymes describe life on the streets and love on the dole in all their grit and glory, a northern Mike Skinner with a skill for both the profound and the daft. Together with production and melody from cousin Dave Royle and the pair’s lifelong friend Lee Royle, they’re ready to take back the city. 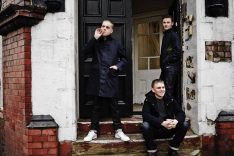 Plucky and poetic three-piece Prose wear their Mancunian identity on…