Horse (born Sheena Mary McDonald, 22 November 1958 in Newport on Tay, Fife, Scotland) is a Scottish female singer-songwriter. She has a wide following in the UK and worldwide and has toured with Tina Turner and secured several record chart hits in Europe. She is noted mainly for her rich, sonorous voice, and The Scotsman referred to her as "one of Scotland’s all-time great vocalists, also possessed of a keen songwriting intelligence".

To celebrate the 20th anniversary of her debut album The Same Sky, Horse and her band played the entire album on a concert tour of the United Kingdom in October and November 2010.

Horse toured in March 2011, playing an unplugged acoustic set with the full band. These concerts featured "exclusive previews of several new songs from the upcoming ninth album, as well as Horse standards and rare B sides".

She is also slated to appear in the soundtrack of the forthcoming UK independent film, About Her.

Horse appeared on the 2012 charity single ‘It Does Get Better’ created by The L Project. The single benefitted LGBT charities, and was written in response to the suicide of LGBT teenagers.

Horse and her band had a UK wide tour in 2012 and visited Australia (Perth, Sydney, Melbourne) to great reviews.

She performed a one-off show at the Barrowland, Glasgow 2 March 2013 with the Scottish Chamber Orchestra to celebrate the twentieth anniversary of God’s Home Movie and the release of her ninth studio album HOME.http://www.glasgow-barrowland.com/history/historybands.html

She will be touring later this year in the UK, Germany and Australia.

This article uses material from the Wikipedia article “Horse (musician)”, which is released under the Creative Commons Attribution-Share-Alike License 3.0. 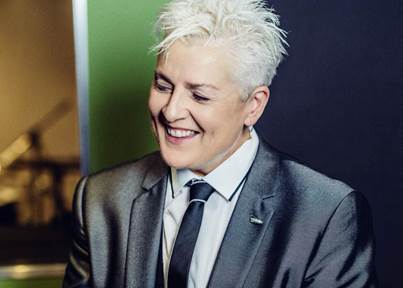