Elbow, Everything Everything, Public Service Broadcasting, The Slow Readers Club + More Announced for Passport: Back to Our Roots

We’re super excited to announce Elbow, Everything Everything, Public Service Broadcasting, The Slow Readers Club and Ash are the first bands to announce gigs for Passport: Back to Our Roots, the new campaign to raise money for independent grassroots music venues at risk of closure due to the COVID-19 crisis.

Entry to these shows is via prize draw. The Crowdfunder campaign opened at 10am Monday 17th August and will run for two weeks. For a £5 minimum donation to the campaign, you’ll be entered into the draw to win entry to the show of your choice for yourself and a friend. So set your alarms!

We’ll be announcing more shows across the country. The next ‘block’ of gigs will be announced when the two week campaign for these shows closes. 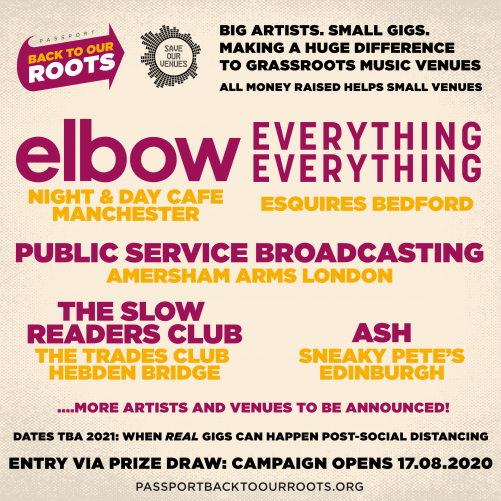