During our temporary closure, we’re digging deep into the Band on the Wall archive to pick out some of our favourite recordings from gigs gone by. The doors may be shut but the volume is still cranked.

Here is a clip from the legendary Sun Ra Arkestra from 2016, who celebrated 60 years of the ensemble live at Band on the Wall, directed by their enigmatic leader, the then 91-year-old saxophonist Marshall Allen. This excerpt from the show features their performance of ‘Angels and Demons at Play’, a composition first committed to record in the mid-1960’s on the album of the same name. Enjoy.

Sun Ra was one of the greatest and least known jazz artists of the last four decades. Composer, bandleader, pianist, poet and Afro-Futurist philosopher, he founded his Arkestra to take jazz into unexplored territories – his style drawing simultaneously on black vaudeville, modern dance, Egyptian cosmology, Eastern philosophy, surrealism, kitsch, and the Bible.

The Arkestra performs today led by alto saxophonist and long-time Ra collaborator Marshall Allen. The mischievous brass blasts and the grooves keep rolling, as the big band – fully dressed, as usual, in space capes with a hint of Ancient Egypt – takes off once again in a joyous burst of tightly organised madness. 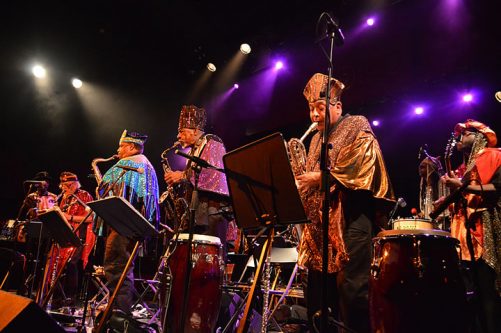