Founded by bassist, bandleader and educator Gary Crosby in the early nineties, Jazz Jamaica has since expanded into an all-star big band, home to some of the nation’s finest jazz musicians and open to collaboration with choirs and orchestras on projects which recognise the enduring legacy of reggae icons like Bob Marley, and influential labels like Motown and Trojan Records. As Jazz Jamaica All Stars prepare to bring the Trojan Story to the RNCM later this month, with vocalists Brinsley Forde (Aswad), Noel McKoy and Dem Three leading the line, we caught up with Zara McFarlane and Gary Crosby to discuss their roles within this monumental ensemble, the significance of music education and the track they would pick as their desert island companion from the programme we’ll hear on the night.

Please can you tell us about your role in Jazz Jamaica All Stars and how it fits into the Trojan Story programme?

Zara: ‘My role on this project is choir leader. I am supporting the choirs that perform on stage with JJAS. Part of that means going to the choirs, whether that be in the schools or evening rehearsals, to work with the singers to prepare the performance aspects: singing and harmonies but also how they move on stage, that sort of thing.’

Gary: ‘I am the bandleader of Jazz Jamaica All Stars, bassist and the MC for the evening. The Trojan Story was also my concept, with support from the Tomorrow’s Warriors team. In 2017, we launched The Jazz Ticket, which was a community outreach programme that went into schools and taught them how to play and perform jazz standards, it was a huge success. The Reggae Ticket evolves that concept and uses The Trojan Story as its focus across seven cities (Birmingham, Bristol, Manchester, Liverpool, Gateshead, Edinburgh and London) in the UK across a year, once again going into schools, working with community choirs and orchestras, with a Trojan Story exhibition and an oral history project.

We launched The Reggae Ticket and Trojan Story Tour during Black History Month in October 2019, the grand finale will be at London’s Royal Festival Hall in October 2020 and we aim to bring as many of the schools, choirs and orchestras from across the country to  London join us. We believe in a world where opportunities for participation, ownership and leadership in music and the arts are available to all, whatever their background or circumstances.’

Does now feel like an especially important time to be sharing this music, its history and impact upon British culture and communities, with audiences?
Zara: ‘Reggae music has had a huge impact on British Culture and the world. It’s easy to overlook how such a small country like Jamaica has influenced music internationally. There has been much more interest in black British history/culture in recent years. Trojan’s legacy definitely has a place within that.’

Gary: ‘Yes, it does, but it is always an important time to stress how black music and culture past and present brings communities together. With today’s, at times insular, self-isolating society, it almost feels like an opportune moment to bring back music that promotes peace, love and harmony between groups.’

If you had to pick a desert island disc from the Trojan Story programme, which track would you choose and why?

Zara: ‘Red red wine. I love the lyrics to this song and the sentiment. I hear this song and also am reminded of numerous covers of it. This one could definitely be on repeat.’

Gary: ‘I would choose Al Capone by Prince Buster, arranged by myself. It was the first and only time I was allowed to produce something for the band, in terms of the writing and arranging of the music, as it is usually handled by Kevin Robinson, Jason Yarde and Ben Burrell. It’s a great track.’

Given your experiences as professional musicians and memories of your own musical education, what are your thoughts about the importance of music education for young people?

Zara: ‘The experience of participating in music gives people the chance to express themselves, challenge themselves, work in a team, learn the art of both working to perfect something and have the abandon to just get up and do something. These are important skills to learn and can really give people confidence in many different aspects of their lives. Also, preparing for a concert takes time and is challenging, requiring patience and determination. These are just some aspects. There is a lot to learn and discover about yourself through engaging with music and performance.’

My motto has been ‘Each one teach one’, as all of us have learned from a generation before us, I believe we should freely pass that onto the generation coming after us, this ethos is firmly embedded into Tomorrrow’s Warriors. By supporting and developing musicians with learning and training into professional careers, we encourage them to give back the skills they learned to the young ones coming through.’

So many fine musicians are alumni of the Alpha Boys School in Kingston: Rico Rodriguez, Eddie Thornton, Dizzy Reece, Cedric Brooks, Harold McNair, members of The Skatalites…is it as remarkable as it seems that so many musicians attended the school, and is there a consensus as to why so many students succeeded as professional musicians afterward? Did Rico and Eddie share any stories with you, Gary, about their time there or the music they were hearing and playing at that time?

Gary: ‘Yes I spent a lot of time talking with Eddie ‘Tan Tan’ Thornton and Rico on three occasions at the Alpha School. My uncle, Ernest Ranglin, and Sonny Bradshaw explained to me the unique process the young trainee musicians were put through to develop. Most of the people at Alpha were orphans, it was an orphanage. Most of the young players would get Big Band experience while studying at Alpha. They would be earmarked by band leaders early and supported by those band leaders to perform around the island. There was a story Tan Tan told me, his first international tour in Eric Dean’s band, a famous Jamaica band leader, was with himself, Eric, Don Drummond, Rico, Roland Alfonso and other Alpha names. They went to Panama on their first tour abroad, all of them were young men, as you would imagine young men on tour enjoying and discovering themselves! I have a few insightful stories from all of my early period running the Jazz Jamaica band, it was like going back to university and learning about Jamaican big band music. Part of the reason why the Alpha musicians were so successful is because the Big Band leaders would use Alpha school musicians to support and build up their bands and that’s why the youngsters developed into such great musicians.’ 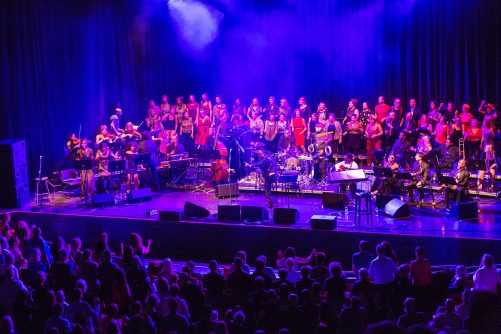 The Jazz Jamaica All Stars perform a rare and unmissable…