As Christmas approaches, we’ve given the final Free Vibes of the calendar year a festive flavour. While the music remains some of the finest underground indie and rock around, curated in collaboration with the unrivalled new music champion Shell Zenner, the artwork is a Christmassy as it comes, and there might just be one or two festive tunes in Zenner’s record bag on the night. Entry as always is free (good news if you’ve splashed the cash on gifts and tree decorations) and doors open at 7pm. Need a quick intro on the band’s before you venture out? Say no more.

Based in Manchester, post-punk/grunge quartet Faux Pas will, in their own words: “claw their way into your every waking thought and make you beg for more.” Need we say more? Well, they’ve clearly done so for Shell Zenner, who has championed them on Amazing Radio, not to mention the good people at Help Musicians UK, who have awarded the band their ‘Do it Differently’ grant to take their work forward. New track That’s My Ego is a dark, nuanced cut with wailing, layered electric guitars, mellifluous vocals and a crunchy rhythm at its heart. Fans of The Smashing Pumpkins, Placebo and The Wytches take note!

Post-punk four piece and Whingefest curators Whinge have gone one further than Cassetteboy with their latest single, The Worst One (Boris Johnson). Likening the Tory politician to things as unpleasant as sunburn and a loose filling, they make their disdain for man clear in their snarling DIY cut — proceeds from which will be donated to the Trussel trust, a food bank charity helping to stop hunger amongst those worse affected by austerity. If you dig their sound and share their voting preferences, make sure you’re down the front for their set.

Manchester-based duo Slap Rash are said to ‘epitomise what being punk can mean as a band.’ With “machine-like” drum blasts and powerful bass and synth tones, they generate impactful music from minimal instrumentation. Their gritty new single Zone A encapsulates the tedium of train travel, with raucous energy and a killer two-chord riff. Drink it in. 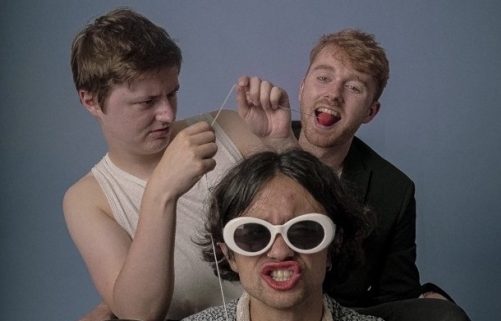 Band on the Wall presents a special Christmas edition of…