Mark Radcliffe on Emotive Electronica, the Present Day Importance of Folk Music, and his support for The Christie

The last 18 months have been a time of significant change for the renowned broadcaster and musician, Mark Radcliffe. He was diagnosed with (and has since, thankfully, overcome) cancer, lost his father, and undertook a new radio slot with long-time co-host, Stuart Maconie. As unexpected and challenging as the aforementioned things were, Radcliffe has also enjoyed some recent highlights, including receiving a special award at the 2019 BBC Radio 2 Folk Awards, unveiling a new inscribed bench as part of The Christie’s Re-Write fundraising campaign, and releasing his debut album with UNE: an electronic project alongside producer Paul Langley, which is intriguingly different to his work with Galleon Blast.

With honesty and warmth, Mark kindly took the time to tell us more about his latest musical endeavour, appreciation for folk music and work with The Christie, following his own experience of how terrific their research and treatment is. UNE perform live at Band on the Wall on Thursday 9th January.

How did yourself and Paul become acquainted, and develop your creative concept for UNE?

MR: ‘Paul and I met in The Builder’s Arms in Knutsford and bonded over a shared love of Manchester City, dogs and music. We’ve only known each other five or six years, but people always think we’ve known each other longer, as we sort of got on really well and made each other laugh a lot right from the beginning.’

Had you not begun this project with Paul, do you think that you would have ended up creating electronic music of your own volition?

MR: ‘I doubt it really. I have always loved electronic music since hearing Kraftwerk and Tangerine Dream as a teenager, but I am a singer, guitarist and drummer. I have no expertise with technology and gadgetry at all. So Paul takes care of all that and I do the words and the vocal melodies over what he’s written. We work separately for the most part only coming together for the final mix and edit.’

Has your perception of electronic music: what constitutes it, how it works etc., changed, since you began working together?

MR: ‘Not really. Although I think that we were very determined that, though electronic, the songs conveyed very human and real emotions. I don’t think of what we’ve done as in any way cold or remote.’

Ralph McTell, an artist you have admired from an early age, presented you with a special award in acknowledgement of your long career in broadcasting, at the recent BBC Radio 2 Folk Awards. What did that mean to you, given the circumstances?

MR: ‘Yes, that Folk Award came as a real surprise. It was to celebrate my 40 years in radio and to stand on the stage at The Bridgewater Hall, about a mile from where I began my career at Piccadilly Radio in 1979, and to receive a standing ovation was very very special. It was also amazing that the true gentleman and legend Ralph McTell presented it and I was very struck by the thought that, at the same time the previous year, I was lying in hospital having treatment for my cancer. What a difference a year can make.’

On that subject, you recently helped to launch a new campaign for The Christie, unveiling an engraved bench at the University of Manchester. How did it feel to be involved, and how can people who wish to support the campaign do so?

MR: ‘That bench was another incredible moment. It’s at Manchester University opposite the arts block where I used to study, and under the window of what was my dad’s office. He passed away last year. I do everything I can for The Christie and Cancer Research UK, as without them I wouldn’t be here. The bench is part of a campaign to build a new research centre at the Christie and I would just encourage people to donate at ReWrite Cancer.’

With your ties to the folk scene, you’re better placed than many to see how the music evolves and how it remains important to society. What are your thoughts about the importance and relevance of folk music today?

MR: ‘Folk music had always been the voice of protest, of standing up for justice, of the struggles of the working man and woman. I can’t think of a time during my life when things have seemed so unfair, uncaring and unequal as we are now. Therefore I think that the current crop of folk writers are spoilt for choice when it comes to subject matter. There have also been huge numbers of incredible players coming out of the various degree courses and folk conservatoires so the standard of young musicianship is just incredible.’

Have you begun making plans or resolutions for the new year? If so, are there any you can share with us?

MR: ‘I don’t really do resolutions but since my cancer treatment I’ve had a really positive outlook on life and so my only resolution is to max out each day and take the good out of everything that happens. Oh, and global success for UNE obviously.’ 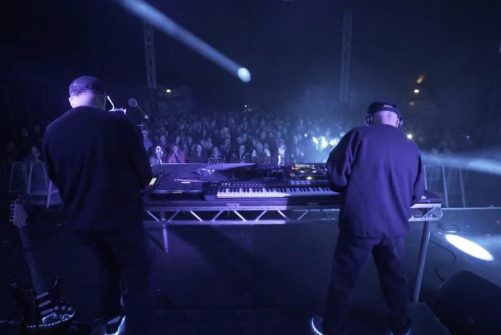