Hannah Williams & The Affirmations on that Jay-Z track

Jay-Z’s 4:44, which takes shape around a sample from Hannah Williams & The Affirmations’ Late Nights & Heartbreak, has amassed 18 million YouTube views, two GRAMMY award nominations, and served as the spearhead for the rapper’s certified platinum studio album of the same name. But in an age where statistics are abundant without necessarily being telling, how do we gauge exactly how impactful it has been for the Bristol-based band, who piqued the attention of 4:44’s producer, No I.D., almost three years ago? We decided that asking vocalist Hannah Williams and MD, songwriter and keys player James Graham would be a good start! As the group push their soul-rooted sound further with the phenomenal new record, 50 Foot Woman, we were keen to know how their fortunes had changed since the release of Jay-Z’s track, whether their relationship with the song had changed, and how they were creating today, with that chapter of their career behind them. As the below interview details, it is their focus on progression in the studio and maintaining a high level of performance on stage, which is pushing them forward. Catch Hannah Williams & The Affirmations at the Deaf Institute on 6th December and read our full interview with Hannah and James below.

Can you tell us about some of the ideas that underpin 50 Foot Woman, and why that felt like the perfect title for the new record?

HW and JG: ‘The concept of the 50 ft. woman came quite late in the process. We had been working on a selection of material, and once we had accumulated enough ideas, we began tying the thing up holistically. 50 ft. woman, visually musically and conceptually, completed that job for us.’

Was there anything you did during the creative process of the new record: from the writing through to the mixing and mastering, that was a first for the group? Were there any ways in which you challenged or pushed yourself to discover something different, that you hadn’t realized on previous records?

JG: ‘Yes. This time round we were very much focused on forming an identity and playing with this concept infiltrated the writing process. For example, the lyric in Tablecloth “nicked on the pavement for stumbling home” is quintessentially British. That whole song, lyrically speaking, is. And sonically speaking the whole record has these elements in it. We wanted to show the raw energy of the band. By recording everything in one or two takes, and through tape, it was the truest representation of us we could achieve.’

HW: ‘We were also committed to capturing the energy of our live show on this album, which is no mean feat. Shawn Lee shared this commitment and was a major driver in asking him to produce the record. Choice of producer, studio (ATA records in Leeds), engineer (Neil Innes), method of recording (live to tape), format and order of songs was to aid the “live-ness” of the album.’

How have your fortunes as a band changes since Jay-Z sampled Late Nights & Heartbreak? Has it been as drastic and far-reaching as fans might envision?

JG: ‘Not particularly. Here in Europe hardly anyone comes to watch us because they’re into Jay-Z, which I think is a good thing. If our fans were only interested in us because of this sample, it would be really hard. But modern bands playing soul music being as niche as it is, means we have fans who are devotees of this specific music, which is awesome.’

HW: ‘As James says, I don’t think the sample is the reason people choose to listen to us or come to a show, but I do think it’s the reason plenty of people discovered us and that is awesome! There’s a whole new audience who may never have sought us out but they discovered us through a track that was so fundamentally catapulted into the public eye. Now that has changed things. But, we are the same band we always were and we work even harder than ever before to make sure this opportunity for a global presence is taken full advantage of.’

How, if at all, has it changed your relationship with the song itself? Do you see the song in a different light, and has the need to hear it and play it so much changed how you feel about it?

JG: ‘The band has a very interesting relationship with this song. It was written by a friend of the band, and when we first started working on it, not all of us heard its potential. It grew and grew in importance of us before the sample. Then when the sample happened it continued to grow, because of the nature of the song. I never get bored of it, and that’s a sign of a great tune.’

HW: ‘I love this song. I was one of the band members who did not see the original potential when we were first sent the demo by Keenan but, boy, am I glad we gave it a chance. It’s a potent moment in the set and I genuinely enjoy hearing the response to the first line. It’s only then that I know how many of the audience have heard the sample or not. I love it when they have. I love it when they haven’t.’

Live performance is key for you guys, given that you’re such a talented, well-drilled group. How do you typically prepare for a show or run of shows, and what, in your eyes, differentiates a good live band from an exceptional one?

JG: ‘Playing in a band is like looking at a warped image of yourself. You never really know what it is, because you’re in it. We rely on what the crowd gives us, but that changes from night to night, so to be objective can be quite tough sometimes. But we all practice a lot before, and Hannah has her rituals, like having quiet time 20 minutes before show time, and not wearing shoes because it makes her feel more connected. It’s different for everybody, but when you find what works for you, it’s important to stick with that for every show, because every show is important to us, no matter where or what show it is.’

HW: ‘Our live show is the most important focus for me personally. I genuinely believe that our prowess on stage is what sets us apart. I care more about the way we make our audience feel than anything else professionally. If people go out feeling emotionally charged, if they cry, smile, laugh, dance, get angry etc…then our job is done.  We work tirelessly to craft our set to ensure it delivers a clear, emotional story from start to finish. We all have our rituals just before show-time, but the way in which we prepare ourselves for touring and the show we are bringing has to be a constantly changing beast, because with every tour, every song, there is a different collection of elements which need to be served in the best possible way.’

What are your feelings about the state of funk and soul music in 2019? We’ve seen some standout records on the label you work with, Record Kicks, as well as Colemine, Mocambo, Daptone and its sub-labels, this year. Does it feel like a good time for the music you make and love?

JG: ‘Yes it does, but it’s also easy to be stuck in an echo chamber these days. There’s so much to choose from, and so much amazing music coming out of all different genres, it’s hard to tell whether soul music is gonna have another boom or not. But we’re trying to break away from being ‘just a soul band’, like so many other bands. So we experiment with the boundaries of the genre, and with our sound, to carve out something which represents us. Whether or not that will blow up – your guess is as good as mine!’

HW: ‘I think this is an amazing time to be making music. Every day, we are discovering artists who inspire us to keep doing what we’re doing.  We have met a whole bunch of incredible artists whilst we’ve been on the road, either by listening to suggestions from each other or from sharing the stage with other acts. To mention just a few: The Marcus King Band, Theo Lawrence and the Hearts, Altin Gun, Vaudou Game.’ 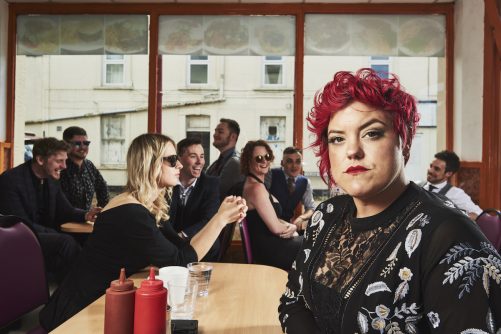 Hannah Williams & The Affirmations + Kaze at The Deaf Institute