Guide to the Week of Music: Songlines Award Winners and Jazzwise Jazz LPs of the year Announced

Songlines magazine has announced a handful of its 2019 award winners, in anticipation of the second Songlines Music Awards ceremony at EartH, Hackney, on 30th November. Those winners include the guitarist, vocalist and songwriter Fatoumata Diawara, who was triumphant in the Africa & Middle East category, Orquesta Akokán, who succeeded in the Americas category, Small Island Big Song for Asian & Pacific, Mariza for Europe, and BBC Radio 2 Folk Award-winners Seckou Keita and Catrin Finch in the Fusion category.

Magazine editor Jo Frost and editor-in-chief Simon Broughton announced the first crop of winners in a 2019 Awards podcast, which you can revisit here. The winner of the best artist and best group categories are yet to be announced, but Fatoumata Diawara is in with a shot at a second award in the former, while 47 Soul and Afro Celt Sound System— both of whom have graced the Band on the Wall stage — are nominated in the latter category.

Songlines magazine celebrates its 20th anniversary this year, and continues to be one of the strongest advocates for the discovery of music from around the globe. We wish them well for the upcoming ceremony and recommend checking out the details and podcast here. Stream Fatoumata Diawara’s 2018 LP Fenfo, below. 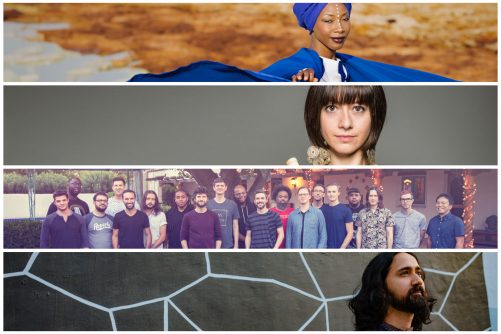