Of the many terrific groups who forged the sound of Congolese rumba: Ry-Co Jazz, Les Wanyika and Shika Shika amongst them, Orchestre Les Mangelepa are one of the last still going strong today. They rose to fame throughout East Africa in the mid-to-late-seventies, capitalising upon their grasp of Kiswahili to communicate with audiences in their resident Nairobi, as well as the countries to which they toured: including Tanzania, Malawi, Zambia. Despite their longevity and continual relevance, it was only in 2016 — forty years on from the release of their debut LP, that the group ventured to Europe for the first time. We’re privileged to welcome the band to Band on the Wall on 20th October, and before then, have picked four tracks we adore as an introduction to their work.

“We became Mangelepa on July 1st, 1976” Kabila Kabanze, aka Evany, told Bandcamp in a 2017 interview. The group was formed when several members of Baba Gaston’s Baba Nationale — purportedly one of Kenya’s most popular groups of the time — broke away from the bandleader over financial disputes. Kabanze was amongst the liberated group of musicians, who quickly set up the new group and secured themselves a residency at Nairobi’s Uhuru Park Inn club. Mangelepa Kamili is a glorious reflection of that time: a celebratory track that begins with the band whistling and chanting, revelling in their completion as a band and setting out their musical mission. It rolls into a fizzy horn riff, before melodic guitar interplay takes over, setting a backdrop for the band’s astonishing harmony vocals to take centre stage. The rumba rhythm is present via the hand percussion, but the sound is also fresh and electrified, with surging electric bass and wandering electric guitar lines. A beautiful introduction to the band!

Early single Kizungu Zungu is a nine minute jam stretched over two sides of a 45, fading and returning midway through. It features one of their coolest bass lines – pulsing notes which pop through the mesh of tight and melodic harmony vocals, as a tart snare drum roll keeps time in the right channel. Blistering guitar and horn solos dominate the latter part of the song, as the group play away with joyous abandon.

Another timeless classic from their early years, Embakasi exhibits the same unwavering vocal harmonies, brittle yet soothing guitar licks, fiery horn lines and dynamic bass playing as the aforementioned cuts. Where it differs is with Mukala Wa Mulumba’s expressive drumming: raised and choked hi-hats and constant variations in the beat propelling the track along and punctuating the changes in section. Brilliance!

When the group returned to the studio in 2016 with No Nation’s Guy Morley, they sought to update some of their best-loved material, utilising the skills of the band members who’ve joined since the early days and help to realise their Nairobi Vibro residency. Nyako Konya is the song that first introduced Morley to the band in the late nineties, and he says of the band: “There is something about them, they are extraordinary musicians, their hooks and melodies just make you want to dance. Mangelepa will always have an edge.” 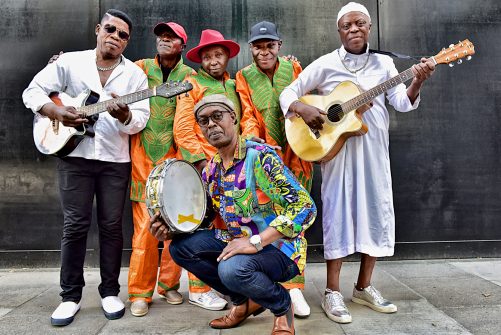 Originally from the Swahili-speaking Eastern Congo, Les Mangelepa were formed…