Azymuth discuss their early seventies demos, memorable travels and thoughts on being sampled and remixed

A revered outfit in the realm of jazz-funk, Brazilian trio Azymuth continue to play with remarkable passion, vigour and vision, some fifty years on from their formation in Rio de Janeiro. While founding keyboardist Jose Roberto Bertrami — who played on such classics as Azimüth, Light as a Feather, and their newly-released 1973-75 demo collection — is sadly no longer with us, original members Ivan ‘Mamão’ Conti (drums) and Alex Malheiros (bass) have found a new muse in Kiko Continentino, with whom they recorded the outstanding 2016 LP Fênix and continue to tour. It has been our pleasure to host the group several times in recent years, and will be once more when the group return to the Band on the Wall stage on Sunday 3rd November. Ahead of the show, we spoke to Mamão about the period from which their demos derive, his return to music after his hip replacement and his take on the response of contemporary producers, DJs and beatmakers to their work. Read his answers below, alongside keyboardist Kiko’s take on becoming a permanent member of the legendary trio.

You recently released two volumes of demo recordings made between 1973-75. When was the last time you listened to those demos, and when you did, what were your impressions of them? It sounds like the band was already incredibly tight and brimming with ideas!

Ivan ‘Mamão’ Conti: ‘I used one of these tracks at a performance at a festival in Lyon 2016 with DJ Pablo Valentino. I took my k7 tape and put it on a flash drive! The recordings are a great way to experience the sounds we made back then. At the time it was just about playing and making a sound, just for the pleasure of it; we didn’t know what was going to happen next, or how that sound would go on to develop.’

What was Jose’s home studio in Laranjeiras like? What equipment did you have there, and how often did you get together to play there in the years running up to your debut LP?

Mamão: ‘It was a room where we rehearsed almost every weekend that we didn’t have shows. We were all playing in a lot of different groups back then, as well as playing live shows together. In this room there was no acoustic treatment, just a k7 four track recorder and some microphones. We each had our own recording devices as well, which we would use to record our ideas. I still have the k7 device today.’

Kiko, you’ve been playing with Alex and Ivan since 2015. What have you learned about music and your bandmates during that time?

Kiko: ‘I’ve been playing regularly with Alex Malheiros, both live and in the Studio, since 2001, when he invited me to record on his daughter Sabrina’s first album. Me and Azymuth’s original keyboardist Jose Roberto Bertrami. Two pianists on the same album. Great Sounds! I have played before too with Mamão, two times, which were great experiences. In Azymuth I continue to develop ideas, compositions, arrangements and nuances with these two guys, who still have an incredibly high energy and youthful spirit.’

Ivan, you required a hip operation back in 2017, which fans and admirers from around the world helped to fund. Was it easy getting back up to speed after your operation, and how did it feel to receive that support from all those people who were willing you to recover and return to playing?

Mamão: ‘It was immensely pleasurable for me to have this support. I will be forever grateful for that. I pray and thank God for the gift I have friends who in one month, provided the money so I could have surgery. People around the world helped me. People who met me 45 years ago as well as new friends.’

Music has taken the band to some fascinating places. What is the most interesting place you’ve ever had the good fortune to visit, and is there anywhere the band has yet to travel to, that you would like to visit?

Mamão: ‘Each place is a story, a different and loving people. Band on the Wall always welcomes us with the greatest affection. We have been to many countries, Greece, Istanbul, Africa, America, many places. I would love to play in Australia, Oceania, India, China, Dubai. People ask me a lot on Insta and Facebook to play in these places.’

You’ve made so many fantastic records throughout the lifespan of the band, but if you had to pick just one to give to a music fan who had never heard your music before, which would you choose?

Azymuth’s music has been widely sampled and remixed by artists from hip-hop and electronic music production backgrounds. What do you think about other artists reinterpreting your music, or recognising something in your music that they want to bring into their own production? Is it flattering or frustrating?

Mamão: ‘Flattering. DJs are of great importance in our lives because they brought our music to the young, this put the boat back in full water after we took a hiatus in the early 1990s.’

On your 2008 LP Butterfly, you covered music by Herbie Hancock and Arthur Verocai, the latter of whom you worked with on Encore in 2007. How important are those two musicians to yourselves in the band, and to the shape of music in the Americas?

Mamão: ‘We are big fans of both. Hancock is one of our idols. And Verocai is a great musician and arranger who we have had the pleasure of working with on a number of occasions.’

What makes performing music special to you? Does experiencing music live, in person, give the audience and performers something special that can’t be felt through recordings?

Mamão: ‘Yes. It’s much more pleasurable and exciting. The public participating is amazing, and it’s what makes all the difference. I really enjoy being in the studio recording, making a different sound, but it’s so great to be with the audience.’ 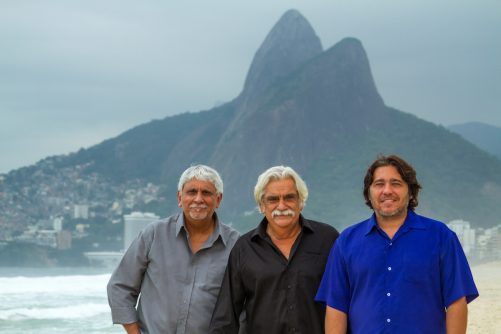 Legendary Brazilian jazz-funk trio Azymuth return to Band on the…