Dizraeli on his new record, The Unmaster and the creative implications of climate change

Rapper, poet and musician Dizraeli endured frustration and consternation to produce his new 21-track record, The Unmaster. The staunchly independent artist expressed on social media that its tracks are ones he stands by ‘more than anything else’ – alluding to the artist payoff experienced when a creative block is finally breached. Ahead of his performance at Band on the Wall on 24th September — alongside a relatively new backing band — we checked in with the Bristolian to discuss the making of his new record, concerns about the climate crisis and its implications for artists.

Your forthcoming record, The Unmaster, was three years in the making. Can you explain for us why the album took as long as it did to complete and how you developed as an artist and individual during that time frame?

It took three years from the moment I first tried to conjure an idea for it, to the moment I called it Done. In reality the first year consisted mainly of falling apart (which included a long period of artistic paralysis) and then trying various ways to piece myself back together again. That whole process really gave me the album in the end, but it felt like f**kin torture at the time.

You recently had the opportunity to perform the new project in its entirety, with the 47-piece Wilderness Festival Orchestra. Where does that experience rank amongst your musical activities to date?

Oooooh well, very highly. That was mad. I’m a bit weird, and very much an independent artist who record labels are reluctant to go anywhere near, so I don’t allow things like ‘performing my stuff with an orchestra’ into the realms of my ambition. Because that kind of thing costs a lot of money, and is the kind of thing Paul McCartney does, but not artists like little me. I kept turning around onstage and seeing 47 highly-trained classical musicians playing their hearts out, playing parts I’d written on my own, in my room, in a state of panic or confused euphoria, on a third-hand MIDI keyboard my mate Jamie gave me. And these humans were playing those parts on beautiful violins, or curly trumpets made out of vintage gold. It felt like a dream.

You, like many musicians, are awake to the significance of climate change. How do you deal with the anxiety and uncertainty it causes, and how do you reconcile the fact that as a musician, touring is your livelihood, but currently technology and infrastructure doesn’t make it easy to do in an environmentally-friendly way?

Thank you for asking that. It’s a daily rollercoaster, I’m not gonna lie. I find that I need music more than I ever have, right now. Dealing with the idea that it’s possible that we don’t have a future, that the whole sum of everything humanity has ever made might be extinguished in my lifetime… this sense of futurelessness… it’s nuts. It does strange and sometimes beautiful things to me. One beautiful thing is this: sometimes I have been plagued by an obsession with legacy; the idea that my life and work will only have value if it goes down in history, if people in the future say I was Great and my diaries are published and people read them and stroke their chins. This whole climate chaos thing completely scrambles that as a motivation, because unless we drastically change our direction as a world culture, it is possible that there will be no chins to stroke, no people to look back and marvel in a hundred years’ time. So where does that leave me and my legacy? It means I am returning to making music in the way I did before I was a Professional Artist – I’m rediscovering the actual joy of it; the way music brings me and my friends into communion; the way it helps my brain settle down.

In terms of how I work and travel in response to the climate crisis… I’m working on that. I turn down pretty much all work that would require me to fly. I have done tours as far as Egypt and back travelling only by boat and train and bus; which is a fkin amazing ride, you meet people and smell things and collaborate with humans you never would have. But yes it’s a challenge. It is.

Please can you introduce us to the musicians in the Dizraeli band, who’ll be bringing The Unmaster to life in Manchester. How did you meet these individuals and begin working together?

My days they are a talented bunch. Raffy Bushman on keys; an insane keys player, part of the Unit 31 collective in London, who are in the midst of the explosion of new jazz happening here at the moment. Raffy also did all the arrangements from my album for the Wilderness Orchestra to play. Hannah Davis on vibraphone, samplers, percussion and voice. Hannah is made of music, and can do pretty much anything. I am very lucky to find someone who’s an amazing singer as well as a sick percussionist. Ben Brown on drums and samplers. Ben is one of my favourite drummers in the UK, and plays fierce and passionate.

When people listen to the forthcoming record, or go to a live show, what do you hope they take away from the work you’re doing?

I hope they take away joy, and a sense that we are together in whatever’s coming, and I hope they taking away damp clothing because they’ve danced. 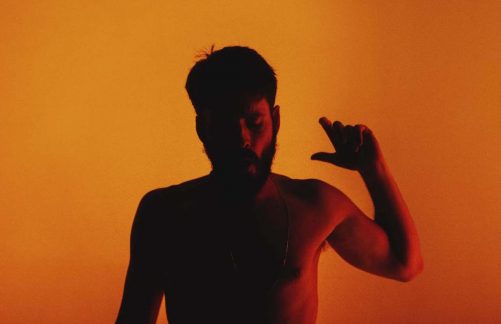