Helmed by one of the UK’s foremost Hammond organ players, James Taylor Quartet came to prominence as a driving force of the Acid Jazz movement and remain one of the most respected jazz and funk-informed ensembles playing today. The group have performed at Band on the Wall many a time: from slots at the Craig Charles Funk & Soul Club to numerous headline shows during the past decade, but return for the first time in nearly four years, this August. Their signature tune, The Theme from Starsky and Hutch and their equally well-loved Austin’s Theme are firm fan favourites, but ahead of this year’s show, here are four more fine cuts from their deep back catalogue, that we’re certain you’ll enjoy.

A standout cut from the quartet’s fourth studio record, Breakout channels the same funk energy heard on classic records by The J.B.’s and Kool & The Gang. With chanted vocals from the posse, dynamic horns, beautiful harmonies and awesome sax work from Johns Wallace and Wilmott, the stage is set for Taylor to cut loose with a fine Fender Rhodes solo, plus his full arsenal of Hammond techniques: from quick, rhythmic staccato chords to luxurious legato pads in the chorus and a rip-roaring solo in the middle-passage. Classic JTQ.

It takes skill and assurance to take on numbers from the Motown catalogue, which is exactly what JTQ did on their 2007 covers LP. On Machine Gun, the track originally recorded by The Commodores and released in ‘74, Milan Williams’ funky clav playing is assigned to Taylor’s Hammond, with the arrangement otherwise bearing stunning resemblance to the original. The JTQ rendition retains all of the joyous funk of the original, while putting a cool spin on the time-honoured classic.

It goes without saying that the James Taylor Quartet are a stunning live band, but if it were ever doubted, this recording from London’s Jazz Cafe, released in 2008, is the track to turn to. An effortless funk groove, it springs to life with choppy rhythm guitar and Taylor’s warm Hammond lick, before some sensational soloing and a triumphant coda. The crowd response at the end of the cut says it all.

Soundtrack from Electric Black is a culmination of James Taylor’s career-long ambition to make a momentous big band album, that keeps funky rhythm at its heart, while benefiting from the filmic drama of large ensemble arrangement. With roots in the crime thriller musical stylings of famous film composers Lalo Schifrin and Henry Mancini, perhaps even the Blaxploitation soundtracks crafted by Curtis Mayfield and Isaac Hayes, these tracks were initially planned for production use only, but given a full commercial release thanks to the incredible energy at the sessions and response of those involved. So successful was the project that, in June, Taylor was back at Abbey Road (where the first project was recorded) once again, working on another orchestral project with Audio Network, who helped make Soundtrack from Electric Black happen. Black Belting is a thumping ‘70s funk inspired cut, which wah wah guitar, awesome woodwind parts and a heavy, dramatic arrangement. Shut your eyes and picture a man hot-footing it through Harlem, then allow the music to build the narrative from there. 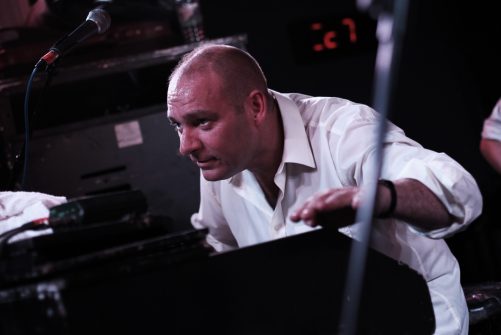 James Taylor, one of the great British instrumentalists of his…