The lowdown on the next edition of Free Vibes ft. Louie Louie and more

Free Vibes returns on Thursday 11th July with four fierce local outfits taking to the Band on the Wall stage. As always, this 18+ event is free entry, so you can soak up some exciting new sounds without checking the bank balance beforehand. Read on for a bit of background on each of the bands performing live next month.

Manchester-based three piece Louie Louie released their So It Begins EP in mid-March, following a February show at The Deaf Institute and a set here at Band on the Wall last Autumn, supporting Clitheroe’s Good Foxy. It’s a confident EP, with material ranging from their self-proclaimed ‘feminist anthem’ Carry the Man to the evocative rock ballad Solstice. Lead vocalist Rita Faria has garnered attention recently with her vocal contributions to ITV’s Cleaning Up soundtrack, while the band have played an acoustic session on XS Manchester and series of recent shows to spread the word on the new release. MEN call their “Bruising, narcotised Rock ‘n’ Roll,” the kind of sound “that will make you fall in love with guitar music.” We recommend checking out their video for Play House below and XS Manchester session here.

Following recent shows at Night People and Retro Bar for Dot to Dot festival, Manchester-based four-piece The People make their first appearance at Free Vibes. The electro-soul collective released their Machine Eden EP in February, which we recommend checking out below.

Post-punk outfit Blanketman have been likened to Joy Division — one of the many groups to play at Band on the Wall during the Manchester Musicians Collective era — in a Louder than War review. They’ve gigged hard since forming in 2017, recently headlining the Castle Hotel stage at When in Manchester festival and opening for Tinfoils at The Peer Hat, and promise ‘NEW SONGS, NEW GUEST MEMBER, NEW LEASE OF LIFE’ ahead of their Free Vibes debut. Check out their Dead Basic Studios session below and check out their ‘Made in Manchester’ MEN feature here.

Little over six months on from their first gig, The Early Mornings already sound like a band certain of their aesthetic, having drawn comparisons with revered groups like The Raincoats and Television. They combine poetic lyrics with DIY post-punk instrumentation, stripping things bare and delivering from the core. Their latest cut, Nowhere Else, is streaming now on SoundCloud and you can check out the video for Yoni below. 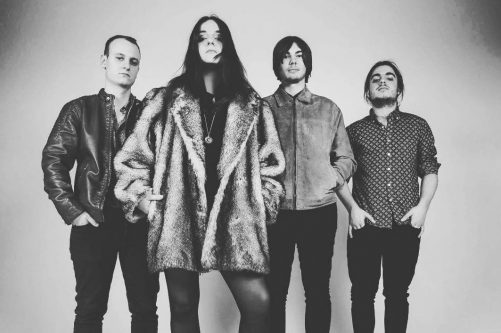 Band on the Wall presents a special edition of Free…