Crocodiles is the project of Brandon Welchez and Charlie Rowell, who met almost thirty years ago in San Diego, California. Both determined to commit to music, the DIY punk and garage rock enthusiasts embarked on their first tour some ten years later, battling with broken down transport, but ultimately deeming it a success. The formation of Crocodiles took place in 2008 and in the years that have followed, the duo have cut seven inventive albums, honing and developing their sound. Crocodiles perform live at Soup Kitchen on 17th May and ahead of the show, here are five tracks to introduce the band.

Groove is in the Heart/California Girls

Long live the B-side! Without it, we wouldn’t get such magical creations as this. A spaced out, garage rock cover of Deee-Lite’s Groove is in the Heart that segues through a haze of delay into The Beach Boys’ California Girls. Cut as a B-side for the 7” single release of Sleep Forever, the track has become Crocodiles’ most streamed cut on Spotify. Its famous lick, sampled from Herbie Hancock’s Bring Down the Birds for Deee-Lite’s original, is slowed down further and encrusted in distortion, while the melody of California Girls is flattened into a simpler and more direct sequence.

Think of a teardrop guitar and chances are you think of Brian Jones, Siouxsie Sioux or Robert Smith. It’s an iconic rock ‘n’ roll item that serves as a device in Crocodiles’ 2013 single, for one to seek solace in when things become too much. Whether or not a teardrop Vox was used on the record is unclear, but either way, the track’s blistering fuzzy riff sounds immense on any axe.

The opening cut from one of Piccadilly Records’ favourite LPs of 2012, Endless Flowers has a bittersweet melody, raunchy guitar parts and a classic backbeat. Be its subject matter, unrequited love or something deeper, it evokes nostalgia for those formative experiences of love, with its dizzying production sweetest of sentiments.

Wait Until to Tomorrow

One, two, three, four, five, six! Crocodiles began 2019 with Wait Until to Tomorrow, the first single from their new album, Love is Here. With its Modern Lovers-esque lick, the track conjures up a classic seventies rock vibe, while sounding fresh and sharp, thanks to the immediacy of the guitar part in the right channel. The album from which it is lifted ‘expresses heartbreak and anxiety on a global scale’ and those ideas exist in microcosm within this track.

With a dubbed out field recording not dissimilar to the famous E-mu systems ‘loon garden’ patch from ‘90s house and DnB records running through it — this deep, downtempo cut is a genius piece of production from the band. Spacious, with a whip-crack snare and anthemic chord structure, it shows a darker and deeper edge to their sound. 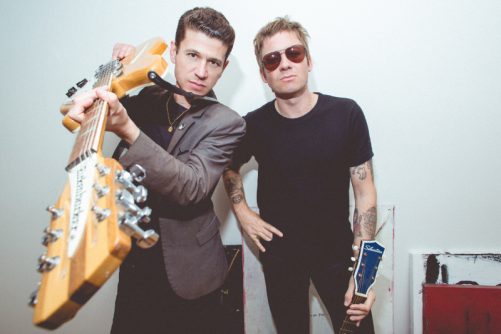 The first American group to sign with Deaf Rock Records,…