‘I have learnt a lot by watching people.’ states Pama International leader Sean Flowerdew. His words have dual meaning, considering that since the turn of the century, his band have both expertly assimilated the sounds of classic ska, soul and reggae music, but also responded musically to some of the key issues that affect British citizens, such as austerity and violent crime. The group’s sound and songwriting has always been earnest and conscientious; it was enough to make them the first new Trojan records signing in 30 years back in 2006. Soon to return with a brand new album and live show at Band on the Wall on 25th January, we were eager to chat to Sean about the band’s new line-up and forthcoming record, as well as the UN’s findings on austerity, which tie into the themes underpinning the band’s new record, The Altruistic Soul Sound Of…

Pama International’s debut LP came out in 2002. What has changed for the band since that record was released? Have your working methods and sound developed since those early days?

SF: ‘Outwardly, the biggest change since our debut is the band line up, but the idea of Pama International was always been to pull from a collective of great musicians and singers. Over the years I’ve been lucky enough to include members from The Specials, Madness, Style Council, Steel Pulse, Galliano, The Upsetters, as well as collaborating with Billy Bragg, Dennis Alcapone, Dave & Ansel Collins, Wrongtom, Mad Professor, Dawn Penn, Rico and Derrick Morgan. So the line up is always changing and morphing. That keeps things fresh.

My working methods have definitely changed. Hopefully the albums have gotten better with each release, but I’ve also learnt a hell of a lot. I’m still learning all the time though, and the next album will have a different approach than the last. The sound develops naturally as I’m always trying to push things forward. I don’t like to stand still in music. So each album is influenced by what’s going on in my life, my surroundings and the music I’m listening to.’

Your 2017 LP was entitled Love & Austerity and featured the track Austerity Skank. The UN recently delivered a damning verdict about austerity in the UK, what are the band’s thoughts on the situation?

SF: ‘Damning is pretty accurate assessment of the UN’s findings. It is disgusting how the government has been allowed to drive the non-wealthy into destitution and poverty. And how they’ve been allowed to run down schools, hospitals, the NHS, the police, ambulance and fire service through deliberate underfunding. How, on a daily basis, they allow people to go hungry, go homeless and die is criminal. Whatever your politics is this is wrong and the government should be held accountable.

We need to rebuild community, something that has been eroded. We need to work together and help each other to fix all that’s wrong and to ensure we elect a British government that will tackle all these issues. I love what someone like a lady called Pauline Town is doing in Manchester, helping the homeless on a daily basis. The We Shall Overcome project is superb’.

SF: ‘It’s a soul album that I started writing in my head back in 2009! Apart from the album we made for Trojan Records, every Pama International album has had one or two soul songs on them. I just wanted to make a full soul record. I love the raw end of soul, so it’s very inspired by the southern soul sounds… folk like Betty Swann, Al Green, Booker T & the MGs, Irma Thomas, Betty Harris, Otis Redding and the recordings of Aretha Franklin and Wilson Pickett in Muscle Shoals. Being a UK band, there are also the British soul influences like Joe Cocker, Eric Burdon and Dexys. Plus a bit of northern soul thrown in.

It has been a very long process recording and mixing this album and trying to get it how I heard it in my head. We are somewhat there with it. I have got to a stage where it is what it is, but overall, I’ve learnt making it that I’m now looking forward to recording a part 2 album for release Autumn 2019. There’s ended up only one cover version on the record. A northern soul take on Joe Cocker’s You Are Soul Beautiful ballad. Our version rattles along nicely. Craig Charles has very kindly played it for three weeks on his BBC 6Music show.’

Did you ‘road test’ the new material before hitting the studio to record and will any new songs feature in the set when you tour?

SF: ‘We’ve done one show with the new line up and album songs. That was last September at London’s Alexandra Palace supporting Toots & The Maytals in front of 8,500 people! It went better than I could of wished for. Considering no one in the audience had ever heard the songs before they warmed to them pretty quickly. So I couldn’t be happier with how it went.’

You’ve put together a playlist for us. What can you tell us about the theme you’ve gone for and the music you’ve chosen?

SF: ‘I’ve gone for a playlist of soul songs that inspired me to write the album.’

If you had to pick one Pama International song to feature on a definitive Best of Trojan records compilation: what would select and why?

SF: ‘I’d go for It’s All About The Money, Betterment Blues ft. Dawn Penn or Neither High Nor Dry ft. Dennis Alcapone. All three songs were written and recorded for Trojan Records in 2006.   We were the first new band they signed for 30 years back then and those are my 3 favourite songs we recorded for them.’ 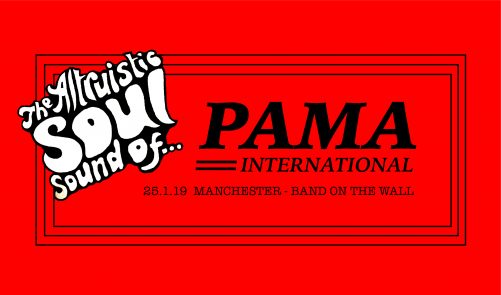 Following up on their critically acclaimed album Love & Austerity…