Though fundamentally influenced by the West African funk of Fela Kuti and The Funkees, Manchester-based outfit Agbeko recognise the importance of treading their own path. The sound of Nigeria 70 will always be a touchstone, but as saxophonist, composer and bandleader Jamie Stockbridge acknowledges, their style is one which must reflect their own background, beliefs and experiences.

“The reason I stopped trying to write things as authentically ‘afrobeat’ as I could is because I grew up near London in the nineties and noughties.” Jamie explains. “I wasn’t born in the sixties, I didn’t live in Lagos in colonial or immediately post-colonial Nigeria and ultimately, trying to play that music as best as possible, you would probably hit a point where – sooner or later – it just isn’t going to sound like the real deal.”

Since forming in 2015, the 11-piece group have built upon their afro-funk foundations, harnessing scales and meters found in Ethio-jazz as well bringing rock elements to the fore. They’ve also taken a political stance, addressing topics such as the United Kingdom’s EU membership referendum and its ugly fallout with the same passion and vitriol that Fela found when attacking the corrupt authorities in seventies Nigeria.

Such characteristics make them the perfect group to be supporting Seun Kuti & Egypt 80 at Band on the Wall in November, shortly after their single launch show at Soup Kitchen. Like his father before him, Seun Kuti maintains a staunch political stance, and alongside his group — many of whom played with Fela and endured the same difficulties as he — carries forward the legacy of the music that greatly impacted Agbeko’s sound. Stockbridge describes the opportunity to support Seun and that band as “mental” and adds, “we’re very lucky that we’ll get to stand at the side of the stage and watch these people, who are the real deal!”

Before the support slot comes after the band’s 7” single launch show at Soup Kitchen on 20th October. It’s a special one for the group, whose music is to become available on vinyl for the first time, courtesy of local label, Stutter & Twitch. The restrictions of the format have, for the first time, directly influenced the band’s creative process, giving rise to an arrangement of new single Leaders of the Free World that otherwise wouldn’t have materialised.

“The creative process was quite interesting as I had this song written and for the first time ever, we had to take a step back and think about how to get it to fit on the 7” format.” Jamie confirms. “Obviously, in a live show, you’re afforded quite a lot of flexibility with the duration, but it was the first time I’d really sat down and thought: ‘ok, maybe we can cut this little bar out here…’ We took it to the entire band and figured out where the fat could be trimmed, to make it a punchy, short and snappy 7” style thing rather than a more repetitive, immersive live festival experience, without the integrity of the tune being compromised. That was really interesting to try and achieve because it’s something we’ve never done before with our music.”

As well as being restructured, the track was also mixed to suit the physical format. “Matt, who is one of our percussionists, produced all the music and we mixed it so the bass got a little louder toward the end of the track, because as you go toward the middle of the record you tend to have a reduction in the bass frequencies that come through. I would never have known that without Stutter & Twitch telling us” he laughs, “so we mixed it to compensate for that.”

Jamie expresses that the label have been a pleasure to work with and that, in a stroke of serendipity, both they and the band’s mastering engineer recommended the same vinyl manufacturers, assuring them that the single will sound as beautiful on your deck as it did on their studio monitors. When the band play live, the new single reverts back to initial longform structure and will no doubt play a vital part in both their single launch and Seun Kuti support set.

Looking ahead to the rest of the year and beginning of 2019, the band have a packed schedule, but Jamie is keen to begin composing once again. “I’m getting back on the writing, because we’ve had a crazy summer,” he explains. “We’re gonna do the launch and then get a couple of new tunes learned and in the bag. Then we’re opening for Seun and the following weekend, we’re in Milan playing at Linecheck festival. Then on 12th December, we’re playing at the Klondyke club in Levenshulme, which is a really nice local, spirited gig as part of a series called Night Time Economy, run by Caoilfhionn Rose, who has just put a record out on Gondwana. As well as being a great musicians, she’s a very conscientious promoter and supporter of the scene.” The band have begun recording for a spring release and are anticipating another packed year in 2019. With a sound as tight as theirs, underpinned by the principled songwriting and tireless work ethic, they’re certain to spread their music further and wider in the next twelve months. 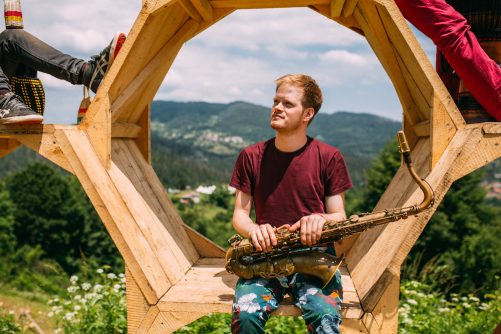 We’re taking Manchester favourites Agbeko across the Northern Quarter to…