Chaines discusses the Pioneers of Sound prom, the benefits of residency participation and their non-binary transgender identification

Last month, the BBC held one of their most challenging Proms to date: a celebration of experimental composers past and present, with a focus on electro-acoustic composition and sound manipulation. Manchester-based composer Chaines — who has participated in creative residencies delivered by Brighter Sound in recent years — was one of the artists involved in the Prom, seeing their work performed live by London Contemporary Orchestra. While reviews drew attention to the prominence of female composers, Chaines in fact identifies as non-binary transgender. Their identification differs to that of contemporary artists like Anohni and Angel Haze, but is becoming more widely recognised, as societal attitudes toward gender identity develop. The topic is one that Chaines openly discusses, alongside their experience of participating in creative residencies and their sound production setup. Read our full conversation with Chaines below and check out their enrapturing album The King, described as ‘strikingly original, provocative, and bold.’ by Fluid Radio, here.

You were recently involved in the Pioneers of Sound Prom. How did you come to be involved and how did it feel to be part of a wider celebration of electronic and avant-garde music, within that prestigious space?

CHAINES: ‘I’ve been working with the London Contemporary Orchestra since 2016 (thanks to the cellist Oliver Coates playing a track of mine at an LCO gig at The Roundhouse) and they were the orchestra curating this Prom. I was chatting on Facebook messenger with one of the orchestra’s trustees about doing something with drum pads, and they suggested I pitch something along those lines to Rob Ames, the conductor. I thought it would make sense to arrange my track Knockturning from my recent album The King, cos I knew it was a good track that would translate well for full orchestra. Fortunately, Rob was into it!

As to how I feel about it: obviously it’s very cool to be part of such an iconic music event, and programmed with such names as Derbyshire, Oram and Spiegel. It’s amazing to have your stuff delivered with such love and energy by an orchestra who are excited to perform what you’ve made and who get it, and to do that in a venue like the Royal Albert Hall – wow. Kinda surreal. It’s an odd one on the other hand however – I don’t consider myself a classical music artist – I have a classical music education, but I’m a weirdo art pop electronica ambient something or other artist. I found myself afterwards being evaluated by a small portion of reviewers through a much more old–school lens, and it felt like someone complaining they couldn’t buy a meatball sub at my vegan pho restaurant. Having said that, I think a lot of the Proms audience enjoys being surprised by what gets programmed, and the piece got a lot of love, so I wouldn’t want to dunk on that!’

You’ve been involved in several Brighter Sound residencies, both here at Band on the Wall and at MOSI. What impact have those experiences had on you as an artist?

CHAINES: ‘The residencies have been very important to me and my development as an artist, truly. In particular, the lasting relationships that have come out of them have been something to treasure. In particular, I found modul:projects really spectacular – for someone who wasn’t actually trained formally in a great deal of tech, they really turned my world around. I’m an Ableton user, and a DAW enthusiast in general, but I despise trying to learn via video tutorials, I much prefer learning with someone in person. That tech is so powerful, having even small revelations about how to do something can make a massive difference. The guys who deliver it are also some of the most lovely humans I’ve met. Don’t sleep on modul:projects.’

Having come out as non-binary transgender, has your experience as an artist changed at all? Do you feel that strides need to be made for those identifying similarly to be better represented and for their preferences to be more widely understood?

CHAINES: ‘Definitely. I was misgendered in some sections of the BBC Proms program notes, which was disheartening. The guy I talked to who wrote the bulk of them understood and was respectful, but I don’t think that note got carried to whoever was responsible for writing the rest of the text. The ‘they’ pronoun is not a grammatical error, it’s not a millennial indulgence, it’s my gender. I expect (and am chill about) accidents in real life conversation, but when errors occur in written and official things, it grinds a bit.

This is definitely symptomatic of a wider societal problem though – a lot of people don’t know what non-binary genders are, people often regard non-binary genders as a joke, and currently there’s no 3rd gender option on UK passports and official documentation. It’s really dehumanising, I’ll be honest.

I’ve also had to think about how I deal with to the slightly awkward position of being called or implied to be a ‘female composer’ when that comes up. It is very important to have a healthier representation of women in music and arts, and it’s something I absolutely support. When I get called a ‘female composer’ however… particularly when I declare myself trans in my social media bios and that goes ignored, that’s not okay.’

What does your music making setup currently involve? Do you impose restrictions upon yourself to keep the process streamlined, or are you regularly adapting your setup?

CHAINES: ‘I’ve got my computer, Ableton 8 (and I sometimes use bits and pieces from Logic Pro 9), some MIDI controllers, a mic, a soundcard and my monitor speakers. It’s pretty straightforward, to be honest! Does my desk count as gear? More than anything else, it’s been great learning tips and tricks from other Manchester-based musicians – that’s what’s been expanding my skill set. I play a few instruments that make their way into my tracks, and I sing too.

I’m pretty terrible at imposing restrictions on myself! Timbral variety and flexibility is very important to me, and I enjoy getting stuck into detail. I’m the first to admit that can be detrimental to the larger picture when it comes to making a track though. More than that – it can drive you potty. More recently I’m finding being more focused on fewer elements can make for strong musical statements, and that has been freeing, because that means tracks don’t grow into giant beasts you don’t know how to finish/that take about 2 months. Having said that, above all things, I get bored very easily, so I generally try to do things that challenge me or keep my attention. Variety is my jam; so I want some tracks simple, some complicated, some short, some long, some easy, some difficult.’

The King is astonishing, can you tell us a little about its concept (is it an Original Sound Track concept) and how the visual and audio sides of your art, interact?

CHAINES: ‘Thanks! I guess I don’t think of it as having an OST concept – but it would be wrong to say I don’t think of my music in a programmatic and quite visual manner. Francis Ford Coppola’s Bram Stoker’s Dracula, David Lynch’s Twin Peaks and the video game Silent Hill 2 have all gone into the feel of this album, sometimes in a more obvious way, sometimes in a more subconscious way.

The album artwork, the cover (three towers of some kind?/a castle?) and the vinyl sticker (some kind of dripping stained glass) are both meant to be fevered visual artefacts from a world that’s as dark and compelling as the universe of Twin Peaks, Silent Hill or an F.F. Coppola film. The tracks on the album often depict large imposing spaces inhabited by strange, mutated, emotional ghosts. There’s a bright cathedral bathhouse in Knockturning, there’s Dracula’s castle and Transylvanian forests in Carpathia, there’s the desolation of Twin Peaks and Silent Hill in DOWN and Population 5120. The art and media I treasure the most often depict a place in such a visceral and/or emotional way, you feel greatly compelled by the place and want to be there – even if it’s somewhere scary or isolated.’

Your NTS show provides a great window into your musical taste, but more broadly, what music are you enjoying at present?

CHAINES: ‘Various old favourites – anything by LORN, the soundtrack to the video game Bastion, Grimes… I’ve also been very inspired by watching performances of Indian raga on YouTube. It’s priorities are very different from Western Classical music, so it’s very refreshing to hear and learn from, and the musicianship is incredible. I’m also enjoying listening to more RnB and rap on Spotify – genres I definitely neglected as a kid – genres I think a lot of classically trained musicians know embarrassingly little about (myself included) – and my mind is being happily expanded.’ 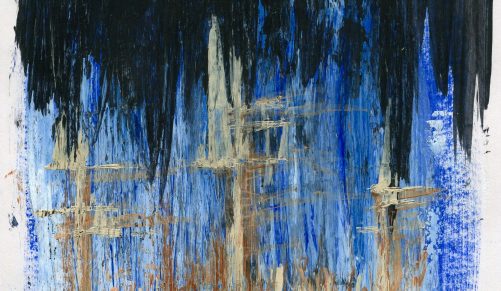