Rekesh Chauhan is an accomplished pianist, knowledgeable artist and an inspiring, articulate speaker. He performs live at Band on the Wall on Tuesday 27th February – his first concert in Manchester since 2015, and we were thrilled to speak to him beforehand. We discussed the musicians who inspire him, collaborate on his various projects and contribute to the force that heals and gives balance to him. We also found out more about the Eastern and Western schools of musical thought and the details of his forthcoming show.

The piano is a most popular instrument and is studied throughout the world. When did you first begin playing and who were the composers or performers you looked up to during your youth?

‘I began playing from a young age. In fact, my first introduction to a keyboard instrument was the harmonium which is a hand-pumped organ often used and heard in Indian music. Whilst growing up I was inspired by a wide range of musical icons from Liszt and Chopin to modern day jazz pianists such as Chick Corea. I am still inspired by them all, very much so. Each time I listen to their works, I discover something new which puts into perspective that music has no end, even if you have listened to a piece a hundred times over. It is awe inspiring how you can hear something new in the same composition.’

You have both Indian and Western classical training – for the non-musical listener, what are the fundamental differences between these schools of thought and how does a knowledge of each benefit your playing, composition and understanding?

‘Both schools of music have distinctive characteristics. The Indian classical teaching method is based predominantly on an aural tradition. There is a great deal of emphasis on the guru (teacher) and student relationship. The Indian system places great emphasis on this over written music. The vast majority of Indian classical music is based upon improvisation with usually only one theme within the piece itself which is fixed – the remainder of the music is left to the creative ingenuity of the artist. Adjacent to this, there are strict rules which overarch the performance depending on the raga (musical mode) chosen, which the artist is expected to be obedient to.

The western classical training system follows a written down approach where scores are the core reference for the music – extending to the dynamics being detailed. The western music system also adopts the use of harmony. This is not apparent within Indian classical music as the focus is on the melody. Having been exposed to both schools of music and having the piano as my creative canvas, the instrument allows me to experiment and integrate both styles. This leaves me on a continuous exploratory path.’

Modern life can at times be stressful, so mindfulness, the practice of meditation and simply relaxing with the comfort of music, is of great importance to many individuals. What role do you feel music should play in modern life and do you find it directly beneficial to your own happiness and well-being?

‘Music is my medicine. It gives me focus and calibrates my inner balance. I am constantly listening to new music whilst out on the road, travelling in between gigs and recordings. I find this really refreshing, especially as I have to spend a lot of time listening very carefully to mixes during recording sessions. We are constantly surrounded by distractions so it is really important to take time out and listen to music you can connect with. Of course, I would encourage people to listen to live music wherever possible as that experience can never be replicated.’

Yourself, Ashwin Srinivasan and Hiren Chate performed a wonderful rendition of the Ghazal Shahar Dar Shahar, informed by Hariharan and Zakir Hussain’s version. What makes a Ghazal such an emotional style of composition and how did you approach you rendition?

‘The ghazal is a branch of an art form which bases a great deal of emphasis on poetry. So, to perform an instrumental version of a ghazal can be quite challenging as we have to try to portray the feeling of the words through our music – whether that be love, longing or lust. Ashwin, Hiren and I have a great laugh when we’re just hanging out so our spontaneity transpires to our music allowing us to explore the music with an open mind giving us space to explore new harmonies and ideas.’

You recorded Beyond Roots at Milapfest with the great Kousic Sen. How was the experience of recording there, did the environment affect the results of the record and have plans for any new or forthcoming projects?

‘I wanted to record a solo album without any boundaries on the context and length of the pieces – and I am grateful that Milapfest supported this idea of artistic freedom. It was important for me to capture the natural ambience that is created during a concert so we recorded the album just in that way – as a live concert. Capstone provided the perfect ambience and the microphones were placed all around the theatre so we could capture the nuances. Having Kousic Sen, a percussionist who I’ve always looked up to, on the album was a real treat and provided so much energy to the tracks.

I’ve just finished a record with my trio which is due for release in the next month or so, I’m really excited by that sound. I’m currently collaborating with a whole bunch of incredibly talented artists for a new album I am recording, so lots in the pipeline for 2018!’

We’re tremendously excited for your recital, without spoiling and surprises – what can we expect to hear and what do you hope the audience take away from your performance, both here in Manchester and at any performance you give around the world?

‘I always feel a great deal of warmth when performing in Manchester. I last performed here at the Bridgewater in 2015 and I am absolutely thrilled to be back. No two concerts are ever the same, music for me is all about exploration. I will be joined on stage for this performance by the incredible Kousic Sen, which I’m incredibly excited about. I’ll be performing a wide range of music from contemporary, folk to pop reflecting on my experiences so I hope to take the audience on that journey with me through the concert.’ 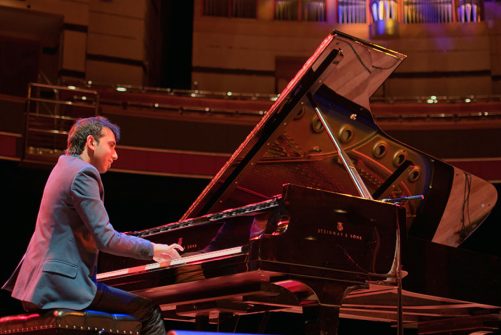 Rekesh Chauhan is a versatile multi-instrumentalist with both Indian and… 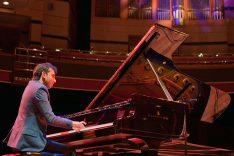 New North and South is a three year programme of…