As Manchester’s urban music scene continues to spread its influence far and wide, we’re continuing to bring you free entry showcases in the heart of the city, featuring the scene’s underground talents and rising stars. December’s Inner City Waves sees Cul De Sac and Leanin’ crew member Truce headlining proceedings; an energetic MC with tireless work ethic and a real appreciation for his peers and the wider scene. With the promise of new material for the show simmering our excitement, we caught up with him to discuss music, Greater Manchester and his ambitions.

Artists from Manchester’s hip-hop, dance and urban music scenes are making international impact at present, with Mixmag, Bandcamp and many others recognising the breadth of talent in the City at present. Which Manchester artists have most impressed you this year and who are you tipping for the top?

I’ve seen an overwhelming development in lots of artists this year, LEVELZ taking the local scene overseas, giving life to the next generation, IAMDDB with the incredible online/international impact, Mouse Outfit paving the way for new talent. With plenty achieved alongside its predecessors. I would say all mentioned have a clear trajectory toward success, and continue to inspire me.

With the music industry ever-changing, what represents success to you as an independent artist, what do you strive for and what would you like to see change in music for your peers and the wider scene you enhabit?

Ownership of one’s intellectual property, success to me is having a platform with a consistent workflow with credit going to the right place. I would like more independent organisations, with a professional edge. Not reinventing the wheel rather taking control of its direction!

You’re a core part of the Leanin’ collective, who’ve hosted parties across Manchester this year and secured a spot on the airwaves MCR live. Any Leanin’ plans for 2018?

LEeeAaaNIN! LEeeANIN! Collective Fam Yes! 2018 upwards onwards, it will be good to go further a field, export the VIBE to other city’s… Nottingham was the start this year. Also programming some stages, Leanin’ take-overs in a field near you! To be fair everything has progressed naturally so it is great to see work paying off.

Your first Cul De Sac single had plenty of people talking and no sooner had it dropped, you were opening for Gaika at Contact’s Black Sound series show. With all of you having your solo work, have you had chance to get some new material down and what are the plans for the group going forward?

YOU KNOW WE NOW! Haha yeh man. This record did its thing beyond expectation, We have new material in the works ready to surface, cooking up a storm! For myself I have also been making some solid material, some of which is to be premiered at Band on the Wall on the 22nd at Inner City Waves! Exciting times!

It’s that time of the year when round-up lists and Spotify playback stats are rife online; what have been the key tracks and albums for you as a listener this year and have any inspired creative decisions you’ve made?

At the start of the years straight, RAYBLK ‘Patience’ was a repeat play for me on Spotify specifically, Later on also Stormzy with ‘Big For Your Boots’. I have always had a place for 140bpm in my heart and Stormzy reminded me how to keep it fresh and challenging. I sometimes listen to Bobby Womack albums when I’m cooking up some goodness in the kitchen.

The lyrics you spit on Fuel are incredibly poignant, with subjects such as homelessness being particularly pertinent to people in Greater Manchester. What inspired your lyrics on that cut and do you find it important to address what you see around you through your work?

I walked passed a friend begging on Portland Street and almost ignored them until another friend insisted I turn around and find out who it was. Turned out to be someone I knew which made this topic really hit home ironically, I already had verses before this but decided the next day after going home and writing new ones to replace my old verses on finals day at the studio ‘quite a risk’ with the new experience, the chorus fit in as positive disposition by chance.

I think it is important to be open to the experiences around you to draw inspiration equally imagination is also a force as well which borders upon those things we are yet to experience. Having balance in living and working is what remains the most useful for me.

What can we expect from your show on 22nd and why should people be excited to come and see yourself and the other guys on the bill?

PURE VIBEZ, a mixture of new stuff some acoustic versions bringing out the percussion rap combo I’ve been crafting, plus a few guests who will light it up, to give a vague idea of where I’m up to musically/lyrically and what directions I’m taking. I’m including two new singles [in the set], ‘Okayna ft. Don Zulu’ and ‘No Where ft. Kid Katharsis’.

Sign up for free entry for Inner City Waves #5 here. 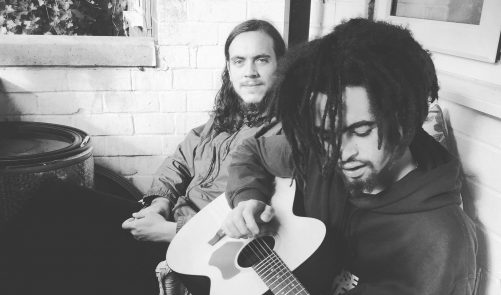