Speaking to what we need: Collocutor’s Tamar Osborn on spiritual jazz, Yusef Lateef and more

Along with London-based groups like The Heliocentrics, Shabaka & The Ancestors and Maisha, Collocutor are providing a fresh and exciting take on spiritual instrumental music. Journeying through subtle regions of jazz and fusion, dipping into the third stream and incorporating instruments from various continents; the band emerge with a sound that is calming and beautiful, much like that of the ‘60s and ‘70s artists that chiefly influence their sound. One such artist is the ground-breaking saxophonist Yusef Lateef, who too made it his aim to broaden his musical palette with sounds from many corners of the globe. We begin our conversation with Collocutor saxophonist and visionary Tamar Osborn discussing Lateef, his music and their recent performance of compositions by the man himself…

Earlier this year, you played your first show in dedication to the Yusef Lateef songbook at Church of Sound. How was that experience for you, how has Lateef’s music influenced your own composition and can we expect to hear some of Lateef’s work at your Band on the Wall show later this month?

The Church of Sound experience was fantastic – the level of commitment from both the organisers and audience to promoting and appreciating jazz from the more spiritual/deep jazz end of the spectrum, and the atmosphere created by playing in the round in a church, is something very special.

I think the idea for the Yusef Lateef songbook came from a chat between one of the organisers and our label boss Pete Buckenham. We knew it was a good fit straight away as I’d used Lateef’s Repository of Scales And Melodic Patterns as research and source material for some of the tunes on our first album. His in-depth exploration of modes from diverse global musical traditions was very inspiring, as was his position as a pioneer of the introduction of eastern musical instruments and ideas into jazz, breaking away from standard structures and textures.

The process of choosing music from his huge back catalogue was both enjoyable and challenging, as we had to select tracks that both matched Collocutor’s musical ethos and that could be arranged for our non-standard line-up whilst keeping the flavour of the original. The whole process was great for developing band cohesion – finding a way to make tunes that relied heavily on piano and drum kit in the original work for us, playing around with percussion textures, and allowing more space for improvisation and reaction in the moment.

We will be dedicating the first half of our Band on the Wall gig to a selection of Yusef Lateef’s music, mixed with one or two of our originals directly inspired by his work.

In today’s challenging music industry, independent artists and labels have to find new and novel ways to fund and fully realise their albums as physical entities. How did you go about preparing and funding the beautiful CD and vinyl versions of The Search and did that process – along with the hard work on the part of yourselves and On the Corner, the commitment of your fans and their support – affect the relationship you have with the finished work?

For us it was a mixture of self-funding, label investment and crowd-funding. Knowing that we were going to crowd-fund made us think about extra things we could do during the recording sessions to connect supporters more directly to us and the music, such as producing a photobook of the sessions and hosting a ‘live in the studio’ gig on the last day. This latter idea was a great way for us as musicians to round off the process by performing the album in full to an invited audience of dedicated followers, and also generated useful and interesting bonus material for release and promotion. One thing I learnt was that crowd-funding needs a huge level of time commitment, not always easy to reconcile with the creative side of making an album!

Having the album as a physical entity (vinyl in particular) has always been an important part of what we, and On The Corner Records, are about as I do think that it changes the way people experience the music, but it does mean that outside situations such as manufacture times and industry-wide release schedules can have a heavy influence on when an album is put out. For various reasons The Search’s release date ended up being pushed back, but luckily our supporters were very patient! Although it was frustrating at first, the delay meant that the release could be tied in more closely with the Church of Sound gig, and personally meant that I could listen to the final results with fresh ears and appreciate new resonances with things that had happened in life in the meantime.

The cover of the record is a beautiful piece of art; who designed the piece and how does it reflect the music and its themes?

The artwork is by the amazing Victoria Topping. She’s the in-house artist for On The Corner and also a jazz fan and DJ, so really immersed herself in the recordings. We had a really good discussion about my own idea of the ‘journey/search/discovery’ narrative of the album, and when we exchanged visual inspirations we were I think both reassured that we were coming from the same place! If you look closely at what she created you can trace a journey through a landscape and city/settlement and out the other side, from front to back on the album or right to left on a print of the art. She also found a way to include some specific elements which related to the dedication of the album to my Mum who passed away while we were getting everything ready for the release, so that makes it all the more special to me.

Can you talk us through a day in the life of a professional woodwind player, working and creating in the nation’s capital? How do you divide your time and ensure music remains fulfilling in day-to-day life?

That’s a tricky one as there’s no typical day for me! It really depends on what projects I have coming up – some weeks are incredibly busy with a mix of rehearsals, gigs, sessions and teaching, and others are much quieter, leaving more time for working on new music or practise (or, as often as not, catching up on admin).

I feel very fortunate to have got to a place where I’m involved in a number of projects I love, where each allows me to explore or develop a slightly different aspect of my musical self, or even introduces me to entirely new challenges, and there’s a good balance between creatively and financially rewarding gigs – sometimes the two even coincide! The thing I do find difficult is finding time to just enjoy listening to music that isn’t directly related to something I’m working on, or to go and see live gigs. Something of an on-going new year’s resolution….

Recent developments in jazz music, successful projects in music’s mainstream and burgeoning movements to which jazz-related musical forms are central, seem to suggest that jazz is as important in the music landscape today as it has been since the album era and reign of fusion groups like Weather Report. What’s your view on jazz music in today’s musical landscape and ultimately, do you feel encouraged as an artist making music today that your work and the work of your contemporaries has traction?

I do feel encouraged. I remember that as a student there was an on-going discussion as to whether ‘jazz is dead’ – whether it was or could remain relevant, or was becoming another historical form. Jazz never went away and always had its enthusiasts of all generations, but was I think in danger of becoming so niche that most people never encountered it, or only did so in it’s most mainstream forms.

The music that has broken through recently demonstrates that jazz can remain relevant and does so by incorporating the ‘other’ interests of creators, bringing these influences (such as electronic music, rock, soul, traditions from other countries) into the music and making it relevant to them & their peers, and subsequently wider audiences. I don’t think this is anything new, it’s pretty much what happened with fusion, but the remit of what is categorised as jazz is broadening again and boundaries between genres are increasingly blurred – music producers have always mined jazz back catalogues for inspiration, but now you have predominantly electronic music festivals such as Dimensions in Croatia and Magnetic Fields in India booking live acts such as Kamasi Washington, Dele Sosimi, Sarathy Korwar and the audiences being incredibly receptive. And the sheer energy of bands such as Polar Bear, Sons of Kemet and The Comet is Coming means they are as at home playing rock venues and festival main stages as in more traditional jazz venues, if not more so.

I also think platforms such as Bandcamp and Spotify have a part to play in broadening people’s interests with suggested playlists and regular roundups of new releases, and online and digital radio, podcasts, mixcloud etc. mean that it’s easier for DJs to play a really eclectic mix and not pigeon hole music so strictly, and easier for audiences to discover and share music outside the mainstream. And the resurgence in the popularity of vinyl has definitely helped!

I find it very interesting that, despite actually encompassing a broad range of styles, much of what has broken through more recently is described as spiritual or deep jazz – perhaps this is speaking to what audiences subconsciously need at this particular moment in time.

What are you listening to currently and do you have any recommendations for music we should definitely check out?

I’ve recently been enjoying the latest releases by Yazz Ahmed, Josephine Davies/Sartori and Ill Considered. All very distinctive sounds, exploring jazz from different perspectives. I’ve also been heavily revisiting some of my favourite 60s and 70s rock – Hendrix, Cream, The Beatles, a little Led Zeppelin. I always want to try to sneak some rock-tinged psychedelic sounds into Collocutor! Other recommendations would be Maffy Falay & Sevda (a Turkish/Swedish collaboration from the 1970s), gnawa musician Mahmoud Guinia, and try to get to see the Cinematic Orchestra live!

What does the rest of 2017 hold for Collocutor?

We’re starting to work on new material, so watch this space….. 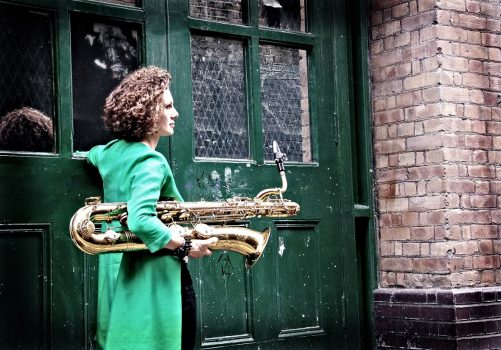 Collocutor are the 7-piece brainchild of saxophonist Tamar Osborn. The… 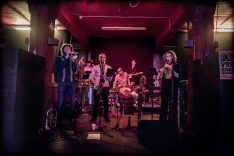 Collocutor is the 7-piece brainchild of saxophonist Tamar Osborn. The project…