No Separation: Anthony Joseph on music, poetry and Caribbean culture

Anthony Joseph is a poet, novelist, musician and lecturer who, during a decade-long musical career, has explored and often merged his multiple art forms, to critical acclaim. He has been described as ‘the leading writer of the Black British avant-garde’ and key to his literary and musical expression are his Caribbean heritage, an appreciation of an array of literary forms and a love for a variety of musical styles: from the rhythm and brass leads of afrobeat to the freedom of spiritual jazz and the distinct style of Trinidadian rapso.

An articulate and passionate individual, soon to embark on his first comprehensive UK tour; we caught up with Joseph to discuss music and poetry, Caribbean culture and his formidable live band, ahead of his performance at Band on the Wall on 7th May.

Your debut album Leggo De Lion was released a decade ago. What were your artistic circumstances at the time of making the album and how have things changed and developed for you since its release?

I’d come to the UK from Trinidad in 1989 and spent the first few years making music with a black rock band I’d formed. We were similar to Bad Brains, Living Colour et cetera. After that period ended around 1994, I left music for a while and focussed more on writing, publishing two collections of poetry. By 2005 I’d started working with music again, to accompany readings from a new novel I’d been working on. The band was just bass, djembe, sax and poetry, it was intense, hypnotic music based on Spiritual Baptist rhythms from my childhood in Trinidad and free jazz. This project became the Spasm Band. Around this time I met Antoine Rajon, who’d become my manager. He released our first 12” Buddha on Heavenly Sweetness and got us signed by Kindred Spirits for the first album, Leggo de Lion, which was released in 2007.

For the second album I expanded the band to include extra percussion and guitar. That album Bird Head Son was released in 2009 by Heavenly Sweetness, a Parisian label, who I’m still with. I’ve released six albums with them, and done extensive international touring. Its been a great relationship, they’ve been very supportive.

Lyrically, material from the debut LP borrows from your novel The African Origins of UFO’s, which leads us to ask about the relationship between your creative disciplines. Do you set out to create work in particular forms and regiment yourself, or is it a freer process where lines and ideas can become lyrics, poetry, prose etc. and in turn part of any project?

I came to poetry through music. I grew up in Trinidad, listening to calypso. Artists like the Mighty Sparrow and Lord Kitchener helped to form my idea of what poetry could be. From them I learned what words could create and manipulate. I actually started writing song lyrics and this became a poetic practice.

There has always been a co-relation for me, between music and poetry, I see both as part of the same process which carves air into complex aural shapes. Poets and musicians share similar concerns; we speak of lyric, rhythm, verses, melody. Poetry for me is a spoken form of music and I’m conscious of this musicality, as most poets are, when I write. There is no separation between music and poetry, at the root, only in the process of its delivery. When I work with music, I allow the music to become itself, then I find words to fit, then, everything begins to gel together, in a mutual process of compromise and assertion.

Who or what chiefly influenced your decision to pair poetry and music? If a friend asked you to introduce them to music involving spoken word, who would you instruct them listen to?

As a Trinidadian, I think calypso, soca and rapso – people like Brother Resistance, and even The Mighty Shadow, had a huge impact on me conceptually, if not stylistically, and of course, I was influenced by The Mighty Sparrow, or even Kitchener, for how they were able to blend word, nuance and meter to produce a music which at its surface seemed high hearted and humorous but which at its core carried revolutionary potential, — a blade behind the laughter.

But I don’t think any one artist influenced my decision to pair music and poetry. People often compare me to Gil Scott Heron, but I only got to know Gil’s work in London in the early 90s, after I’d been writing for many years. Once I discovered him though, it did open up a whole world to me. He had a swagger, was articulate and street smart. People like Mikey Smith, Linton Kwesi Johnson, Amiri Baraka and Allen Ginsberg also have this kind of urban griot vibration about them.

I think that the constraints of music, I mean, the basic motive of placing words within music, has a way of forcing the poet to be economical, to be human. I remember reading something Gil Scott Heron had said, about how rappers should learn how music works, I think its good advice, you have to be aware of the musical or textual value of the word and how this can be enhanced or accompanied by music.

Lots of your work references Caribbean history, given your roots in Trinidad. In Trinidadian society, past and present, how important has the role of the writer, or the teacher, been and has that impacted on your decision to create and teach?

In Trinidad, our first poets and orators were enslaved peoples who arrived in the Caribbean during the slave trade and found a way, through music and poetry, to comment, ridicule, entertain and inform. These were the first calypsonians of the late 18th and early 19th century. So the calypso, the music they created, and which I think is still the most potent musical resonance we have in Trinidad, was always concerned, at its core, with what was being said or spoken. It was all about the lyrics. If you had a god voice, great, but really it was about the words. I think the calypso has been one of the most important aspects of our literary culture and it definitely inspired and continues to inspire me, rhythmically, and thematically. But this is only part of the story. I’m also influenced by European literatures, by surrealism, by Beat writers, by language poetry. I guess in a way, being Trinidadian, I’m in the process, as I move through the world, of somehow creolising these forms.

Since working with Me’Shell NdegéOcello on Time in 2014, she has gone on to score House on the Coco Road, a film about the revolution in Grenada. What do you feel makes the Caribbean such a rich resource, or inspiration, for artists?

The Caribbean is an alternative. I can’t speak for all the islands, but there is a sense that we live there in a unique space, that there are different rules, different approaches to joy and suffering, a different approach to politics even. I’ve been working on a novel which suggests that narrative time in the Caribbean is not linear but simultaneous, and for sure, being there, there is the sense of everything happening at once, a chaos of senses that is very attractive and stimulating. It’s all about the moment. And of course, these are beautiful islands, but with a history of rebellion and resilience. I remember years ago, when I left Trinidad, lots of people were trying to get out, but now, everyone’s trying to get back in! This is not always a good thing, since we are seeing now, a kind of neo-neo colonialism in the way the Caribbean is being mined for its vintage music. This forces us to ask why aren’t we, as Caribbean people caring for our creative cultures. But that’s another story, which is still ongoing.

When performing live, you give the band license to cut loose instrumentally. Can you tell us about the importance of the mood and rhythmic accompaniment and introduce some of the musicians you’re playing with on this tour?

This project has always been about musical freedom. At the start it was all about poetry and hypnotic grooves with free jazz elements, and this is still part of it. I need the musicians to feel free to articulate, to make gestures, to speak back, they have to have some autonomy. I didn’t want a situation where the musicians were just there to back me up, I wanted there to be interaction between all of us. Yes, there is structure, but within the structure they have a certain amount of freedom, to feel like themselves. So I choose musicians who have something to say, as individuals. Andrew John, the bass player, has played with me since 1991! He’s a solid, funky player; exactly what you need on the bottom, Eddie Hick is a phenomenal drummer, coming from jazz but also with a range of influences, Christian Arcucci is on guitar, again, a versatile, open minded player, Richard Olatunde Baker is a percussionist with West African heritage, he’s played a lot recently with Mulatu Astake, and Jason Yarde, on saxophones, who I always refer to as a national treasure, is one of the greatest ‘natural’ musicians I’ve worked with.

What are your plans beyond the Summer and do you have any new projects on the horizon?

I have a new track I recently recorded in Rotterdam with my friend Hanyo Van Oosterom, which will be on the Heavenly Sweetness 10 year anniversary compilation in June. It’s very different from my own work with the band. I’ve finished two novels in the last year so I’m hoping those will be published at some point. I’m hoping to do some more work with Mop Mop later this year, and, I’m working on a new album with the band, but more on that another time.

Pick up tickets for Anthony Joseph’s show at Band on the Wall on 7th May, here. 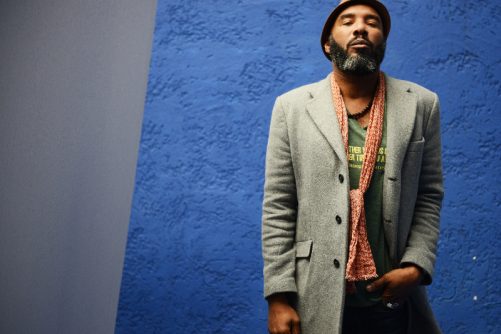 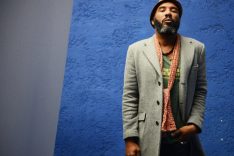