British saxophonist and band leader Nat Birchall has quietly garnered a reputation as one of the country’s foremost creatives in the jazz medium, releasing inspirational music that operates in similar regions to the spiritual works of luminaries such as John Coltrane and Pharoah Sanders. Once a member of the Gondwana records fold and a regular collaborator with the label’s founder Matthew Halsall, the majority of his material is self-released through his label Sound, Soul & Spirit, and his seven-album discography, which includes a 2014 live album, contains an array of inspiring and enchanting compositions. A regular performer at Band on the Wall over the past decade, it’s our distinct pleasure to welcome his quintet back to Band on the Wall on 2nd March 2017.

Ahead of the performance we discussed the art of band leading, creativity in the modern age and the wisdom of jazz’s elder statesmen.

We’re thrilled that you’ll be returning to Band on the Wall in March. What do you have lined up for the show and who are the musicians that’ll be joining you for the performance?

The band will be the current working band, the same line-up that we recorded the last album Creation with: Myself plus Adam Fairhall on piano, Michael Bardon on bass, and both Andy Hay and Johnny Hunter on drums. We will most likely mostly play songs from Creation and some new material that we recorded in December for a new album.

You’re given a lot of credit for your attitude towards band leading and for affording yourself and your bandmates the freedom to play expressively on recordings, something which journalists pick up on when reviewing your albums. How important is it for a bandleader such as yourself to trust their fellow musicians, and what do you see to be the most vital part of leading a jazz ensemble?

To me it’s very important to have the right kind of musicians to play this music successfully. They need to understand the character of the piece and be able to expand upon its various qualities. There’s no room for shredding or grandstanding in this music so the musicians have to be able to play with confidence yet remain humble in the service of the music. When all the musicians fit the bill then I can relax, knowing that the music can happen almost by itself. Personally I think the most important part of leading a group is to have a strong concept of the musical direction, and then to make every effort possible to realise that concept.

Your music often connotes the spiritual, and whether music is deemed to be jazz, reggae, gospel or any other style, that presumably is something that cannot be forced into or upon the music by it’s creator. Do you have to be in a particular head space to compose music that sounds and feels spiritual and if so, what is on the agenda day to day to make this as possibility? Presumably it requires a particular lifestyle and greater sense of commitment…

In composing or playing I try to be in a frame of mind where I’m open to finding interesting and “lasting” sounds. Things, melodies, basslines or whatever, that have some resonance that I can relate to, in other words something that I’m happy to listen to myself. And I believe the music we play, and compose, reflects our “lifestyle” as you put it. Because the way we go about our musical practice affects the way the music ultimately manifests itself. But so does the way we live our lives. Our beliefs, both about music and life itself, very much affect the way the music sounds, I think. I’ve found the most effective way to imbue the music with positive qualities is to find ways to remove the ego from the process, the music then is made with a higher intention than just trying to achieve praise from the listener. Not that I mind when people say they like it of course!

In an age where the discovery of artists is facilitated by technology, you’ve been able to gather an international following without major label representation. Has technology enabled the work that you do and the projects you have undertaken, and where’s the furthest afield you’ve recognised your music making an impact?

Yes, I think the internet/digital age has proved to be very helpful for low-profile musicians like myself. Whereas once upon a time without a major record company involvement the music wouldn’t reach so many people (although the major labels didn’t exactly make a very good job of getting their jazz artists out there in the public eye…) nowadays the audience for a certain type of music can search online and find things with relative ease.

As for the furthest afield my music has reached, I had a guy who came over to the UK from Australia and he contacted me to have some lessons while he was here. I think New Zealand is further but I’ve not heard from anyone there yet!

Did you get an opportunity to speak with members of The Cookers when they passed through Band on the Wall a few months ago? I imagine Billy Harper’s music must be important to you as a saxophonist, and Cecil McBee of course played the bass on Journey in Satchidananda, which you covered on Live in Larissa…

Oh man, I got to speak with Billy Harper for a while at the Cookers gig. It was the first time I’d seen/heard him live after listening to his music and being a great fan for almost 40 years so I was a little starstruck! We exchanged a few emails afterwards, mostly about the music and its meaning to us. He’s a very beautiful person and was very gracious with his time and really took the time to explain things. He’s really kept the faith for so long, despite the difficulties and being generally ignored by the jazz press etc. He’s been a great inspiration to me, both music-wise and otherwise.

Have recent social and political developments, both domestically and internationally, had a baring on the sort of music you want to play and create and the message you want to spread through music?

I think that music has an important function in society, as a kind of communal ritual and as a balm to help with the stresses of life. Of course it can also be seen as entertainment to some degree or another. To me it’s like food, it’s necessary for survival, an essential part of daily life. The kind of music I play, some people say it has definite healing qualities and helps them through their lives, which is about the best compliment I think a musician could wish for. With all this in mind any changes in society, politically or otherwise don’t really affect the way I do the music. I do it regardless of what else is going on in the world and it has its place in that world, whether it’s a world at peace or a world in turmoil.

What are your plans for the rest of the year, do you have imminent releases and ideas for new projects?

We recorded some music in December for release sometime soon. On one of the sessions Adam played Indian harmonium instead of piano, this gave the music a different energy and it worked very well I think. The other session was with the same quintet that did Creation, with the piano as usual. So that’s basically two different albums of material.

I’ve also recorded a reggae/dub album for release. This was a project I did with my good friend Al Breadwinner. Al is a great all-round musician, he plays bass, drums, guitar, keyboards etc. He’s also a really great engineer and has his own analogue studio, using a lot of the same vintage equipment that the greats used in Jamaica back in the day. He’s really studied Jamaican music and especially the recording and mixing techniques of the greats such as Lee Perry and King Tubby. I bought an electric bass to write some basslines and ended up recording with it, we laid down the basic bass and drums track together and then overdubbed guitar, organ, piano, hand drums etc. Finally we put the horns on it all. I managed to get the legendary Vin Gordon a.k.a. Don Drummond Jr. to come and play trombone, he’s been playing with an old friend of mine, David Fulwood, who is a great trumpet player. We had a really nice session with the three horns and Vin was very enthused by the music and played some really great stuff! Al has done some really great mixes of the instrumental songs and some really fantastic dub versions, I’m really very pleased with the effort that he’s put into the music and the way it’s turned out, he’s been a very big part of the project and I can’t thank him enough for all his hard work.

We also returned to Greece last October for some shows. The shows were recorded so I have to listen to all the music and see if we have enough music for another possible live album. So that’s four albums that I have to try and get out there some way or another, that’s going to keep me pretty busy I think.

Tickets for Nat Birchall Quintet at Band on the Wall are on sale now. 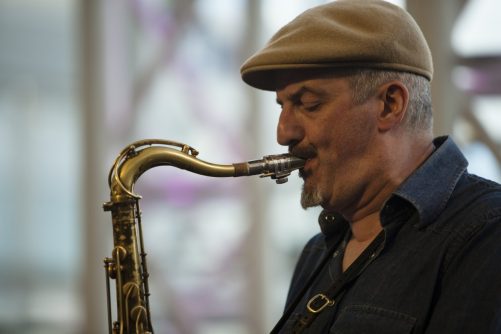 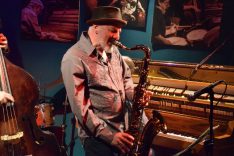