An interview with James Muschler of Moon Hooch

Moon Hooch are a ferocious acoustic dance trio hailing from New York, who cut their teeth in the Subways of the City, forming an energetic sound which incorporates jazz’s virtuosity and flavour with the pulsating drive of techno and electronica. Recent appearances on Later…with Jools Holland and European live dates to coincide with the release of their new album Red Sky, have established them as an exciting alternative act on the international dance scene. They play their first Manchester show at Band on the Wall on 12th July, and ahead of the show, we spoke to drummer James Mulscher about musical balance, their live intensity and their favourite experiences in the UK.

How do you break down ‘cave music’ form the unfamiliar listener? What are the component parts of your sound, and can you chart it’s evolution since you started out in 2010?
Cave music is a wild, primal, and predominately acoustic approach to House music, or club music. This is the concept of Moon Hooch as it began back in 2010, when we would busk in NYC with a minimal setup of 2 saxophones and a drum kit. Since then, we’ve used Ableton to add dimension and depth to our live performances. We’ve also added a lot of instruments, including vocals, contrabass clarinet, Moog bass synth, tabla, flute, clarinet, and bass sax.
How much improvisation is involved in your live performances, and do your compositions change or develop on the road?
Though our live performance is rigid in the sense that we are playing with a computer, every moment of the music has the opportunity to be fresh and responsive. Those moments are influenced by our collective condition, which of course will change from night to night. So in that sense, there is constant improvisation, independent of “solo” sections or “solos.” As we learn from each other, and as we learn from the music itself, the music does indeed change over time.
You’ve been to the UK a few times now, and most recently you appeared on Later…with Jools Holland. What have been your favourite experiences in the UK, and where did the show rank among them?
I’d say that my favourite moment while in the UK was being at Later…With Jools. Performing in the same room with all the great musicians and bands that were there was a unique and fun experience. Tame Impala was there. James Blake was there. Everyone sounded amazing.
Given that your music requires high intensity and energy on your part, how do you approach shows and keep yourselves primed to produce that every night? Has it become second nature?
The endurance comes with practice. And you can really feel it, for example, when we go off the road for a week and then back on again. It takes a day or two of playing the live set one night after the other in order for us to get back to our usual level of stamina. It does not always happen this way, but it is of course a natural tendency. Maintaining the practice of music while off the road helps a lot and keeps the music fresh when we go back on the road. Eating right and exercising helps a lot also. Resting is key too. Balance is good.
You’re all multi-instrumentalists; do you layer your studio recordings with additional percussion, woodwind and synths, or do you keep the recordings true to the live trio sound?
We try to keep an open mind with regard to what kind of sound we’re going for for any particular song or idea. On the latest record, we added minimally, only to create depth and dimension and to add colour to the acoustic sound.
How do you test new material? Is it your preference to take it out into the streets for impromptu performances or is it more of a contained process, playing it among yourselves and those close to the band? Are you playing any unreleased material live at moment?
Lately and for the past few years, we’ve rehearsed new compositions first individually, then together, and then we demo the new music on stage at live performances. We’re playing a few songs in our current live set that are not formally recorded anywhere, although we plan on releasing a couple of them as singles in the not-too-distant future. New songs always need some kind of tweaking in order for them to “fall into place”. Over time, the new material ends up sounding rehearsed and complete.
What are your plans for the second half of 2016, musical or otherwise?
We’re touring a bunch in the U.K. and other parts of Europe in July and September. We’re going to Poland, Germany, Russia, Norway, Serbia, France, and Italy. In August, we have a few festivals in the states and we’re going to do some rehearsing and recording in NYC. We have a long fall US tour lined up in October and November. 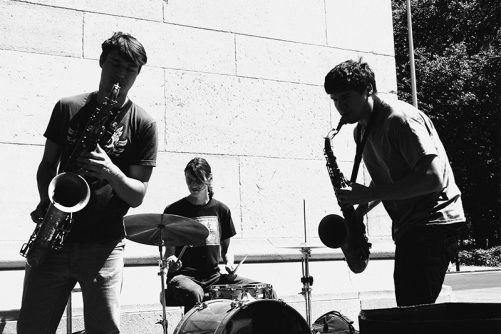 Moon Hooch is an American band from Brooklyn, New York,…

Moon Hooch have released a new live performance of their track…