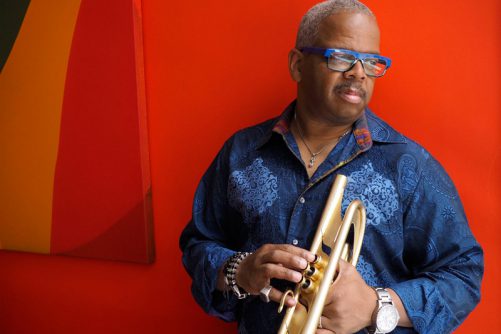 The Jazz Directors Series is a new two-year residency and touring project which brings together emerging UK professional jazz musicians with an internationally revered Jazz Director.

Each tour is a collaboration between Band on the Wall and 4 other independent jazz promoters based across the North of England who will be mentored by the established regional promoter and producer ‘Root Music’.

With this new project, Terence will teamed up with some of the UK’s most remarkable emerging musicians during the residency week. Working outside of the conventional jazz or big-band line up, this ensemble includes instrumentation such as French Horn, Oboe and Tuba.

This competition is now closed, thank you for entering and good luck. Grammy-winning trumpeter and composer Terence Blanchard embarks on…

American jazz trumpeter and composer Terence Blanchard will lead the inaugural Jazz Directors Series residency and tour this September, which…

We are thrilled to announce that US jazz superstar, composer, and producer Terence Blanchard will be leading our first ever…