Hailing from New Haven, Connecticut (USA), Akua Naru’s journey to global poet began in an early upbringing in the Pentecostal church. The oldest of three, Naru began attending church with her grandmother as an infant. Steeped in gospel music, it was there, that a young Naru was introduced to a world of black female leaders, from pastor to choir director- who were steeped in African American musical and oratorical traditions. Encouragement from her family to recite scriptures before the church congregation during holidays quickly, however, soon took an unexpected direction when an Uncle, just 3 years her senior, began sneaking hip hop records into the house in defiance of the family ban on secular music. Already enamored with literature and poetry, Naru found in hip hop a power to describe her experiences with unmatched eloquence, so much so that she and her Uncle immediately began performing as a duo at backyard parties around the neighborhood. Her Uncle, an aspiring producer, would supply the beats for a then 9 year old Akua Naru on the microphone.

Growing up in New Haven, a racially divided city, battling gentrification, rising unemployment and violent crime—one particular experience, in which a teenaged Naru saw a woman brutally beaten to the point of near death, left a lasting imprint on her developing consciousness.  This incident, among others,  would initiate a path of critical inquiry regarding the urban social condition, and the vulnerability of black women, which, along with an interest in history and a commitment to activism, would shape her music and her writings..

Honing her writing in her teenage years combined with an expanding political education,  Naru began participating in youth programs that raised awareness around pressing community issues.  There, she engaged in passionate discussions with other young moderated by seasoned activists who had taken part in the civil rights and black power movements, sparking her enduring interest in revolutionary thought. In her late teens she began studying the works of cultural theorists and political activists like Frantz Fanon , Angela Davis , Malcolm X and Assata Shakur. At this time, Naru also joined a Repertory company where she studied theater, singing, and songwriting. There, for the first time, she was provided access to a full production studio and was able to record and write songs and theater pieces for herself and other aspiring singers and actors. She also began performing before audiences far removed from her neighborhood. The experience introduced her to the magic of performance, further fueling her passion for art and politics.

Shortly after,  Akua Naru attended and graduated from Rutgers University,  and the University of Pennsylvania (UPENN). While at UPENN, Naru taught herself analogue photography and was granted a permanent installation at the University of Pennsylvania’s Graduate School of Education, the opening event at which  the guest speaker was internationally celebrated poet Sonia Sanchez.  Formerly based in Philadelphia, Naru left the United States and settled in Chengdu China for two years before landing in Europe.

Shortly thereafter, she teamed up with Cologne based production team The Drumkidz, and in Jan 2011 debuted her first official release “The Journey Aflame.” The album, released by indie label Jakarta Records,introduced Akua Naru to the world as a well traveled, pensive social critic, a master of lyricism, an avid historian, and a champion of Black women’s voices and experiences.  ‘The Journey Aflame’ highlighted The Drumkidz’s  sample based 90s hip hop productions with a few moments of live instrumentation, and featured Universal Germany singer Mic Donet, Ghanaian-American emcee Blitz The Ambassador, and Brown University Professor & Scholar Dr. Tricia Rose.  ‘The Journey Aflame ’quickly garnered her a strong online following. Shortly after its release it reached #1 on the US College Radio Charts, with songs such as “The Block”being used in the opening credits for the Stacey Muhammad acclaimed web series ‘For Colored Boys, and “The World Is Listening” featured in the Pascal Tessaud directed French film “Brooklyn.”

After a Fall 2011, 22 date USA Tour, Naru along with her band DIGFLO, began working on what would later be released as ‘‘The Live & Aflame Sessions,’ an eleven-track live interpretation of the studio produced ‘The Journey Aflame’ album. The album was released in May 2012 by Jakarta Records. ‘Live & Aflame Sessions’ was  recorded and filmed live with both horn and string sections. The album was mixed by Echo award-winning Wolfgang “Stackman” Stach and produced entirely by Akua Naru. It  featured the acclaimed video for  ‘Poetry: How Does It Feel Now??’ which premiered on Soulculture.uk and has since garnered millions of views.

Naru’s powerful poetic lyricism, talent for story telling, and ability to integrate historical narratives into her music with unmatched eloquence, have drawn the attention of scholars and activists around the globe.. Naru admits to writing “to fulfill the void she needs filled since access to female voice has been so limited in hip hop”.  Due to a legacy of slavery and silence in which being black and women has meant exploitation, marginalization, and damaging stereotyping lasting right up to today, Naru defiantly declares her intention to “provide a body of knowledge”and “honor her mothers mothers voices” by centralizing black women’s experiences in her work. an approach she credits  to the example of Pulitzer and Nobel prize winning author Toni Morrison.

This stance has been evidenced throughout her work, most notably in songs such as the moving “the journey aflame” in which Naru manages to narrate centuries of black female experience from precolonial Africa to the present day in the United States,  Runaway, where she narrates a daughters celebration of her single parent mother, Or Toni Morrison, in which she lauds the great author to whom she credits her development as a writer and daughter of the black literary tradition. As a result, Naru has been invited to speak and or perform in the USA at Oberlin college, Niagara University, Buffalo State College, Texas A&M University, Princeton University, Fordham University , in Sudan at, Ahadi Women’s University, and in Germany at,  Folkwang University, University Of Cologne , and Wuppertal University. She was also an “Artist In Residence” at Fordham University.

What has resulted is a vast touring schedule that spans across continents, and an impressive list of sold out concerts from Sao Paulo, Brazil to London, England. Along with a number of workshop & lecture appearances from across the globe; Akua Naru has proven exactly what her JR & PH7 produced song suggests ‘The World Is Listening ”

In 2012, Akua Naru was featured alongside veterans Ahmir ‘Questlove’ Thompson, Angelique Kidjo, and Tune-yards on the Red Hot remake of Fela Kuti’s classic ‘Lady’. She appeared on the Wax Tailor produced track ‘My Window’ along with Detroit emcee Elzhi (Slum Village). Naru has also featured alongside rapper Rah Digga on the GUTS produced ‘As The World Turns.’ She has toured with classic hip hop act Lords Of The Underground, and performed with Ursula Rucker, Brazilian Emcee, Emicida, Fela Kuti drummer and afrobeat pioneer Tony Allen, Cody ChesnuTT, motown france recording artist Ben L’Oncle Soul, among others. In Dec 2012, Naru participated as the guest of honor in Harare, Zimbabwe for the 14 days of activism campaign against gender based violence. In 2013, Akua Naru was featured in the ARTE documentary ‘Black Hair: Eine Haarige Zeitreise.’ She has lectured with Bakari Kitwana, Dr Tricia Rose, and Public Enemy Pioneer Chuck D. Akua Naru also co-wrote a number of songs on Ben L’Oncle Soul’s Motown France album ‘A Coup De Reves’  released in Aug 2014. 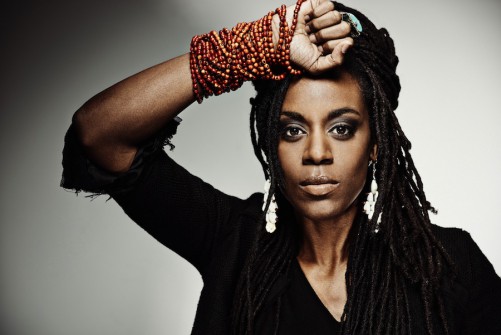