Roosevelt is always looking for that special moment. The producer – Marius Lauber – utilises outstanding electronics, matching club tropes to pangs of melancholy, all wrapped up in gorgeous melodies. Inventive early singles such as “Montreal” led to the outstanding debut album ‘Roosevelt’ and the bold, addictive follow-up ‘Young Romance’, but increased success seemed to take him away from his core desires, from his musical roots.

His early childhood included piano lessons that demonstrated a preference for emotional improvisation over disciplined learning, while his school years found him bouncing around from multiple bands, whether it was playing guitar, bass or drums. The age of 19 found Roosevelt beginning his love affair with DJing, initially starting in Cologne, and leading him to play some of, in his opinion, the most influential shows of his career so far at the likes of smaller size venues like the Social Club in Paris, LUX in Lisbon, Fabric in London, and Panorama Bar in Berlin.

Building a 4-piece live band and creating a festival production, which he took to more than 100 live shows around the world after the phenomenally successful release of second album ‘Young Romance’, Marius drifted into a cherished indie pop phase of his career which he thrived in.

After that meteoric success, he decided to refocus himself on the more intimate, immediate bond he’d felt initially with electronic music. Hearkening back to the intimate rooms that he got his start in, he longed to reclaim the beating heart of the genre; the connection and shared unity with fans.

‘Polydans’ (his forthcoming album via City Slang / Greco Roman) is built around those bonds. It’s got the energy of a club experience, the implicit communication between a musician and the crowd. “There’s something really honest about playing dance music because you can actually see the response of the people in milliseconds,” he insists. “I think there’s something really rewarding in that”. ‘Polydans’ brings back the feeling of club culture into his live shows, where every moment feels electric and alive with nuance.

With ‘Polydans’ he returns to his foundations. it is a re-connection to his musical roots, but also one that introduces startling new elements; a record dominated by warm lights, Balearic sunsets, subtle hues, and an analogue aesthetic. It’s a tour de force of Roosevelt’s incredible musicality – indeed, he wrote and played everything himself, from drums, synths, bass and mixed the album in his personal studio. Intriguingly, though, it essentially happened by accident. “Nothing is that intentional,” he says. “Music is a huge, impulsive process for me…”

An intense studio figure, Roosevelt is guided by his emotional connection to the music. It’s not something he wants to limit, either – from yacht rock to house euphoria to sub-zero techno, he’s drawn to all forms of dance music. It’s right there in the title – ‘Polydans’ – a reference to his multi-faceted take on club culture.

This is a standing show. Presented by Now Wave. 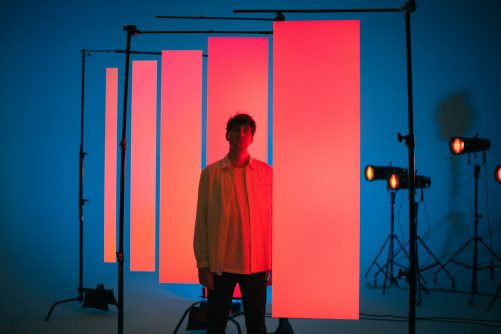